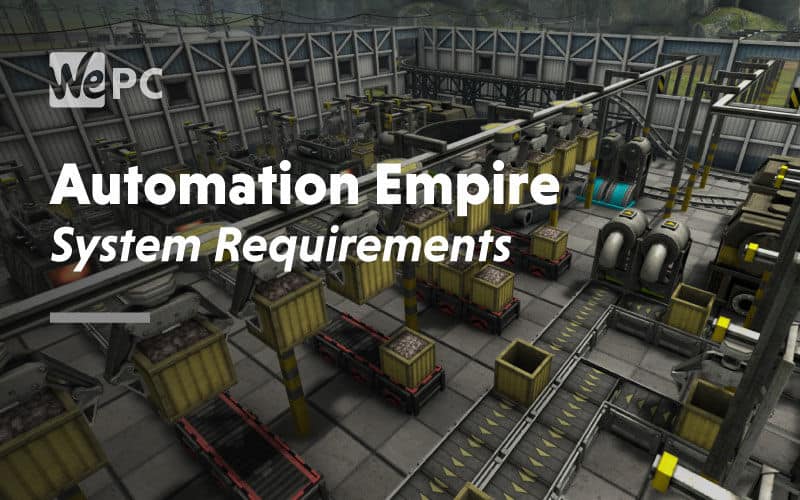 Can I Run Automation Empire?

To determine whether your current gaming rig is up to the demands of Automation Empire, you first need to figure out what it’s housing, notably when it comes to the CPU, GPU, and RAM. If you’re uncertain how to go about doing this, fret not as you can refer to our guide here, which will walk you through the precise steps.

Checking system requirement isn’t exactly a barrel of laughs, so with that in mind, we are currently finetuning a bespoke utility to make the process a lot less of a drag. It will scan your PC and list the specifications in an easily digestible form, side-stepping that part entirely. It’s still under wraps, but expect an update on our progress soon.

Automation Empire is a simulation and management game developed by Dog Hoggler where the player is tasked with managing a massive network of industrial facilities ranging from mines to factories, by way of farms and transportation routes on land, rails, and air. As the name suggests, the game is all about finding the best way to automate production and distribution.

As its typical fare with building games, the player starts with very little and must develop their empire into a sprawling network of interconnected facilities using creativity, efficiency, and maximizing each and every tool at their disposal.

From raw resources to finished products, each step of the production process is in the hands of the player. The key is to find the best and fastest way to do just that by ironing out bottlenecks, constructing complex systems, and researching new technology.

The game offers seven unique sandbox-like planets to build your automated empire on that range in terms of topography, resource allocation, and layout. Each one provides its own brand of challenges based on the unique aspects of each biome.

For a game released in late 2019, Automation Empire isn’t demanding in terms of system requirements. Automation Empire isn’t the most pleasing aesthetically, which factors into its low spec requirements but don’t let that detract from what is a complex and immersive management sim that should please even the most diehard building game fans out there.

With a build sporting the minimum system requirements, you are looking at running Automation Empire with 30 fps at 720p with the settings on medium. Note the 4 GB storage space requirements, which is incredibly low by modern standards.

Moving up to the recommended system requirements, the performance jumps up to 60 fps at 1080p with the settings maxed out or on high depending on natural build variation. The RAM demands do rise to 8 GB, but that’s really the only mildly high requirement. The CPU and GPU combination means the game should run well on the overwhelming majority of gaming rigs built or purchased in the last five years with ease.

If you’re hoping to move into 1440p or 4K territory, consider a more powerful graphics card.

In the $500 build, we’ve also managed to keep costs down without sacrificing power by using comparatively lower-priced AMD components. The build features an AMD Ryzen 5 2600 CPU, Radeon RX 570 GPU, and 16 GB of 3000 MHz RAM. We’ve also managed to squeeze in a 240 GB SSD.

You can expect to hit above 60 fps at 1080p with the settings on ultra, or in other words, pushing the game to its limit in terms of performance. It’s not a high-end build, but for the price, you’d be hard-pressed to find a machine capable of similar performance.