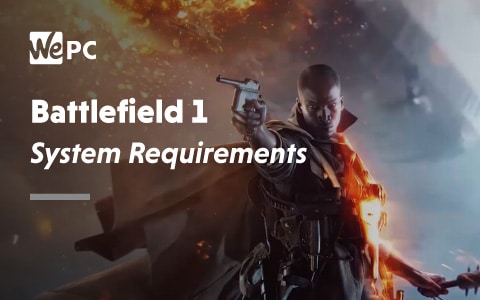 If you’re finally getting around to playing Battlefield’s 15th installment, Battlefield 1 then you have a lot to look forward to. Initially released in 2016, Battlefield 1 comes after a long line of other Battlefield titles that EA has released over close to two decades.

Although this game was released a few years ago, the graphics still hold up superbly today. If you are looking forward to playing this title then you should still take a bit of care to ensure you can run it first.

Will I Be Able to Run Battlefield 1?

There’s nothing worse than getting your hands on a highly rated title like Battlefield 1 only to find out that your PC is just not up to the task of running it. This is not a game that deserves to be played on minimum requirements. As with all first-person shooters, having that many explosions bog down your system will completely ruin your gaming experience.

Here, we’ll tell you a bit about the minimum and recommended requirements so you can check whether your PC will be able to handle running it well. After all, shooting enemies at low FPS is a miserable experience. We’ll let you know what you should be looking for to get that stable 60 FPS and above.

Following on from similar Battlefield titles, Battlefield 1 is a first-person shooter game that focuses on teamwork and strategy to stay alive.

Being set in the World War 1 period means players will get the chance to make use of a variety of World War 1 weapons and vehicles. With a line-up including a range of submachine guns, semi-automatic rifles, flamethrowers, and bolt-action rifles – there’s plenty of action to look forward to.

Players control several characters during the campaign, resulting in the player seeing a variety of landscapes and the varying action that comes with them. One moment you could be in the trenches, in another, you could be high above the action in one of the early airplanes.

There is a great multiplayer mode that can support a huge 64 players and allows you to play in locations around the world including the Western Front, the Alps and Arabia. With this number of players and the resulting action that goes on, you’ll want to have a good enough system to cope with it.

Going by the specs outlined above, you’ll definitely want to meet the recommended requirements for this game, better still, if you have the opportunity to go further, you’ll see graphical and gameplay results immediately…

As with other shooter titles, you’ll want decent enough hardware to hit a stable FPS. We’d recommend aiming for a system in the range of $600-$700. This system might not give you the ability to run the game on ultra settings, but it will still make it look stunning and play smoothly.

If you have deep enough pockets, building a high-end system will no doubt let you run this game at its max. If you’re looking for advice on what components to pick, we have a handy guide for you to look at.