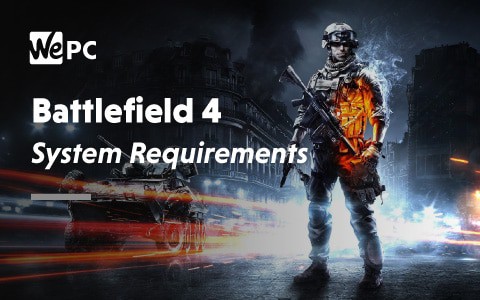 Can I Run Battlefield 4?

Unless you already know that you have a high-end PC, it is always worth checking out if you have the correct system specifications to run a game before you buy it. If you are unsure, we’re here to help.

If you aren’t sure how to check your PC specifications then just take a look at our handy guide. You’ll want to pay attention to the listings for the CPU, GPU, and RAM when checking if you can run a title as these will prove the most important.

We’re currently working on a tool to make this comparison process a lot simpler for our users. We’ll keep you updated on its progress but until then, please have a quick look at the below.

To use this guide, simply compare the specifications from your PC to the ones listed below. Do you fall higher than the recommended? That’s great! If you are below the minimum, however, then it may be time for an upgrade.

Battlefield 4 allows players to experience the many facets of war through its extensive singleplayer campaign and multiplayer modes. In singleplayer, players must make their way through large sandbox-like levels on foot or using some of the readily available vehicles.

Set in 2020, players control Recker as he visits a variety of locations such as Baku, Shanghai as they complete their operations. Landscapes look stunning in this edition of Battlefield and you’ll want to make sure your system can handle them. Recker can also command his squadmates to attack hostiles and mark enemy units as his squad makes their way through these areas.

For the multiplayer experience, Battlefield has always been known to have immersive team-based action and this game is no different. Players will climb the ranks during their playtime while earning a selection of ribbons and medals for their in-game accomplishments.

Four classes are on offer here, the Assault, Engineer, Support, and Recon classes allow for players to change their playstyle from game to game. Over ten maps are on offer with seven different game modes to pass your time here. With destructible environments and a myriad of vehicles also available, the action will be packed.

With Battlefield 4 being a first-person shooter, you’ll want to aim for a solid 60 FPS at least while playing. With some of the locations and level destruction being quite spectacular at times, playing on the minimum recommendations just won’t cut it – especially in multiplayer. You’ll likely spend more time fiddling with the settings than actually playing!

While the special effects for this game are still quite impressive for its age, don’t be too worried about dialing some of these back if you are dropping frames. After all, with so much fast-paced action on stage here, you’ll want to minimize any chance of stuttering. As with most FPS titles, if you are playing on ultra but not quite hitting 60 FPS, try turning down post-processing and ambient occlusion effects to help with this.

If you’re only just meeting the minimum requirements for this game then you’ll definitely want to upgrade some of your components. With the minimum requirements, you’ll likely be playing on the lowest settings and with an unpredictable framerate to match. Even with the recommended settings, you might still struggle to hit 60FPS on high settings and above. It might be possible to achieve with some graphics settings tweaking or maybe a drop in resolution, however.

Even though this game is getting on in years, it still has a couple of effects that might put some strain on your system, especially when it comes to the high player counts found in the multiplayer modes.

Take a quick look below at some of the key components you’ll need to make sure are up to scratch to run this title. To hit 60 FPS on high settings we’d recommend the following:

To be safe here, we’d recommend going for a medium to high-end build of around $800 if you are looking to upgrade for this title. This build will also be a great system to play other titles on, as well as its successor, Battlefield 5.