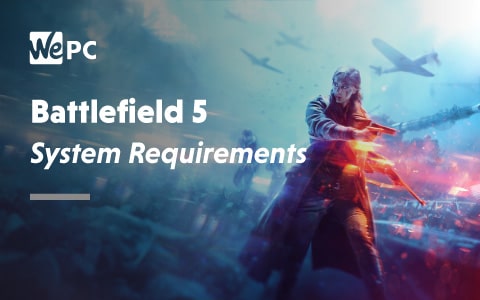 Battlefield 5 is the 16th installment in the Battlefield series developed by Electronic Arts. Following on from its predecessors, this is an action-packed first-person shooter game that managed to sell 7.3 million copies by the end of 2018.

From the trailers and screenshots alone you’ll appreciate that this is a stunning looking game. You’ll want to make sure you have the hardware to match up to this though, after all, there’s no point in having to put up with a slideshow when you could be experiencing the flashy visuals in all their glory.

Keep reading for some details on the game as well as some hardware suggestions that we have in mind if you don’t quite meet the recommended requirements.

As a continuation from Battlefield 1, this title follows on the World War theme with a World War II setting. The single-player campaign is divided into War Stories, much like in Battlefield 1. If you enjoyed the pace of the previous games, you’ll feel right at home here.

In the War Story “Nordlys”, you follow a Norwegian resistance fighter who takes part in the sabotage of a German nuclear program. In “Tirailleur”, you play as a Senegalese Tirailleur during Operation Dragoon.

“Under No Flag” sees the player as a convicted bank robber and explosive expert. The fourth campaign, “The Last Tiger” shows you the struggles of a German Tiger tank crew.

All of these campaigns give you a grand, wide-reaching feel of the game and allow you to experience the world through the eyes of very contrasting characters. This gives you a real sense of the many theatres of the war.

If you’re here just for the famed multiplayer action then you’re in luck. As with previous games, Battlefield 5 gives players a wide-ranging number of maps to engage opponents in as well as a variety of character roles. With destructible maps and an ever-expanding roster of vehicles, it will be a long time before you get bored with this mode.

For a game as visually outstanding as Battlefield 5, you’ll want to be able to run it in all its glory. We’d recommend hitting the recommended requirements and then some. If you are looking to upgrade your PC to play this game, at this point in time, we’d recommend roughly a mid-range build at the very least.

With all the frantic action that you’ll encounter in Battlefield 5, you’ll also want to make sure it runs smoothly. There’s no shame in lowering some of the effects in order to achieve a stable FPS – but if you’re looking to keep the visuals on ultra then you may need to invest.