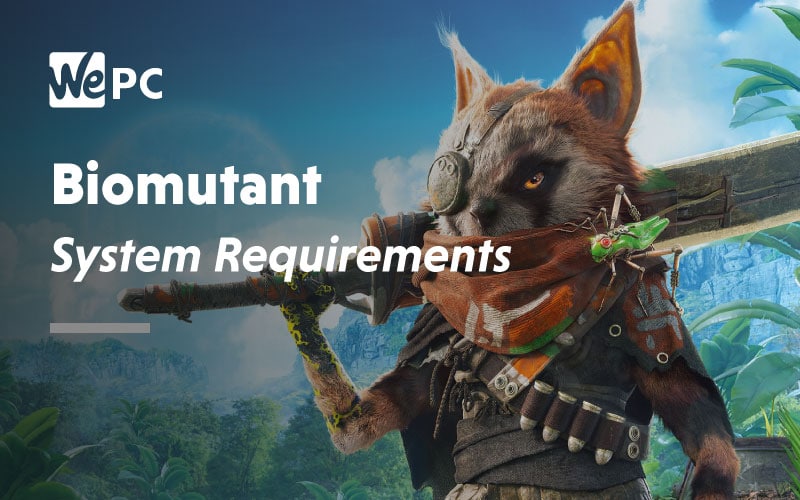 Can I Run Biomutant?

In order to know whether your PC is up to the task of running Biomutant, you’ll first need to determine what components it houses. If you’re not sure how to go about doing this, you can refer to our step-by-step guide right here, which will walk you through the process.

From there, compare your results to the minimum and recommended system requirements for Biomutant we’ve listed below for convenience. Ideally, you’ll want to fall somewhere above the recommended requirements. If not, you may want to put some thought into making a few choice hardware upgrades.

In an effort to make the whole process of figuring out whether a game can run on a system, we’ve been working on a utility to do the heavy lifting for you. It will automatically scan any given PC and provide a detailed list of all the constituent parts. Our team is still deep into developing the tool, but we’ll be sure to make an announcement once it’s ready for action, so check back if it’s something that interests you.

Biomutant is an upcoming third-person action RPG where the player takes on the role of a mutated walking-talking raccoon in an open-world populated by similarly highly intelligent animals.

The story revolves around a cataclysmic event that has left Biomutant’s world seeped in noxious oil that has infected The Tree of Life, a five-rooted conifer responsible for safeguarding life. Throughout the game, the player must explore to the end of each root, warding off the oil as well as enemies, and dealing with split factions.

Through alliances and a Karma system, the player plays a game of tribal politics in order to save the Tree. Much of Biotmutan involves branching storylines where decisions, interactions, and actions have far-reaching consequences that shape the narrative in distinct ways as well as how NPCs, allies, and tribes react to the player.

We need to preface this with a note that the above minimum and recommended system requirements are an estimate and have yet to be confirmed by THQ Nordic. Overall, they aren’t too demanding, but you’ll still need a decent machine, notably in the CPU department.

The minimum system requirements should push 30 FPS at 720p, with the settings toned down to low. Depending on your system, the FPS may fluctuate higher or lower after tinkering with the in-game settings.

As for the recommended system requirements, you can expect a stable 60 FPS at 1080p with the settings maxed out to ultra. This may, of course, differ somewhat on particular machines, but you can expect overall excellent performance.

To run Biomutant, we recommend our $500 build as a good starting point. We’ve chosen an AMD Ryzen 5 2600 CPU to keep the cost down without sacrificing performance. Alongside this, we also have a Radeon RX 570 with 8 GB of VRAM, and 16 GB of RAM.

As you can see, the specifications exceed those of the recommended requirements with quite a lot of leeway to spare. The reason for this is that you will need a dedicated GPU to run Biomutant, and the build is the most affordable way to do just that with the market’s current selection of graphics cards.