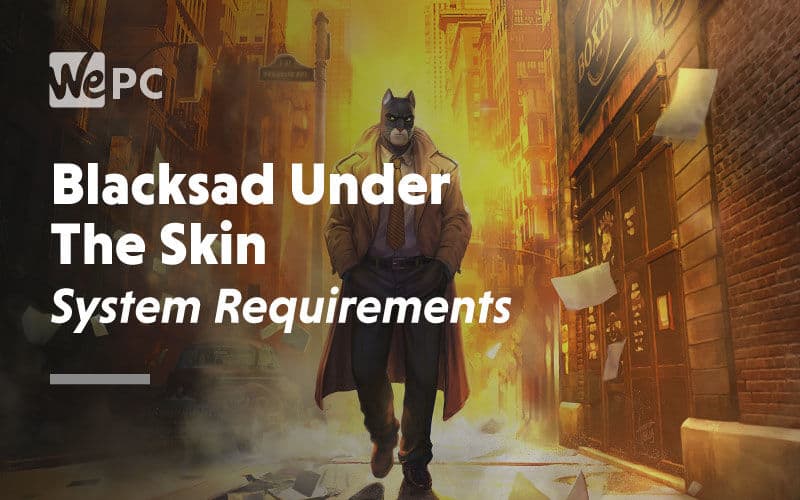 Can I Run Blacksad: Under the Skin?

To figure out whether your PC can Blacksad: Under the Skin, we first need to know precisely what components are housed inside your gaming rig. If the task appears a bit too daunting, we’ve compiled a step-by-step guide, which you can check out right here.

Moving forward, we aim to make the process simpler for our readers, and we are hard at work developing a system requirements tool. We aren’t fans of how tedious it can be to determine if a PC is able to run this or that game. As such, we aim to make it as simple as possible.

When it’s up and running, it will automatically scan a PC and conveniently list all the specifications. We’ll be sure to publish an update when it’s ready to go.

Blacksad: Under the Skin Game Details

Developed by Pendulo Studios, Blacksad: Under the Skin is a detective noir narrative adventure game. The game is based on the Spanish comic of the same name and follows the adventures of titular detective John Blacksad.

Tasked with getting to the bottom of the mysterious murder of a boxing club owner, Blacksad, an anthropomorphic cat, traipses through a recreation of 1950s New York gathering clues and talking to a cast of over 30 unique characters.

Rising starfighter Bobby Yale has also gone missing, and Blacksad must find him to resolve the mystery. Dark and broody, Blacksad: Under the Skin drops players into the unsavory underbelly of the metropolis in search of answers.

Unlike most narrative adventures, Blacksad has the player take control of the lead character and explore a 3D world. Choices and interactions have a direct impact on the game world and how Blacksad relates to other characters shaping how the story and case play out.

Beyond this, Blacksad: Under the Skin features clue finding segments using feline senses as well as quick-time events, multiple-choice dialogs, puzzles, and timed conversations where players are prompted to make decisions quickly.

By opting for a 3D game world contrary to most narrative adventures, Blacksad: Under the Skin is more demanding than you’d expect from the genre, but nothing to rival the big-budget AAA titles of this generation. Nevertheless, the game won’t just run on any old potato, and a decent gaming rig is required, notably if you want to push for the higher resolutions and frame rates.

The minimum system requirements are enough to bag 30 fps at 720p with the settings on low to medium. The 8GB of RAM spec is a little high for this type of game, so keep that in mind when comparing specifications.

As for the recommended settings, the performance jumps up considerably to 60 fps at 1080p with the settings on high. The graphic card demands are pretty steep, with either an AMD Radeon RX VEGA 64 or an NVIDIA GeForce GTX 1080. The same applies to the RAM with 16 GB needed to push the game to its maximum capabilities.

With the build, you can expect to run the game at a resolution of 1080p with an FPS count well above 60 FPS with the settings on ultra.

If you want to future proof somewhat, we can also recommend jumping up to our $1500 build, which features a GeForce RTX 2080 Super for extra graphical power that will translate well to most other modern games. Any more than this, and you are venturing into overkill territory for Blacksad: Under the Skin.