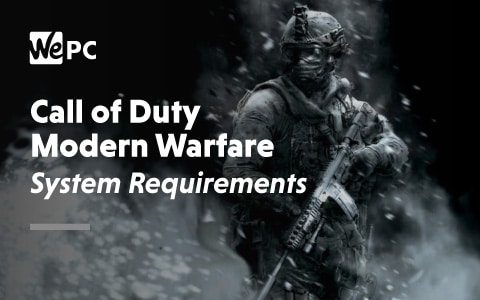 If you are set on playing the latest games when they release, you’ll want to make sure that your PC is up to the task.

There isn’t anything more disappointing than loading up a new title and then having to spend the next couple of hours tweaking settings to make it run smoothly.

We’ll cover exactly what you need to run Call of Duty: Modern Warfare game, including the minimum requirements as well as the recommended ones. Luckily, in the case of this title, Activision has given us some additional information on what you may need to run it in different situations.

While most people look at Call of Duty as mainly a multiplayer experience, this title is set to have an expansive story mode that runs alongside the famed multiplayer.

Fan favorites of the series such as Captain Price will make an appearance in the singleplayer mode, with a focus on character story being prevalent.

Call of Duty: Modern Warfare’s singleplayer campaign will give players a chance to experience a realistic focus on warfare by featuring tactical decisions and moral choices throughout the missions.

Missions will span over a number of European cities as well as locations in the Middle East. Players will get to take on the role of a number of special forces soldiers with different weapon load-outs depending on the situation.

Multiplayer will feature an expansive list of maps in different locations. Killstreaks will make a reappearance again in this title rather than the scorestreaks of old. New modes such as Gunfight where players will face fast-paced action in short 2v2 rounds and Ground War which will feature over 100 players. There is a lot on offer here for players, as usual, this mode will keep players active for months to come.

Activision has given some insight into certain specification load-outs that you’ll want if you’re aiming for a certain playstyle. If you are looking to play using ray tracing then you’ll want to upgrade to the following:

For their ‘competitive specs’ you’ll want the following:

This will allow you to play the game at a high FPS on a monitor with a high refresh rate.

Finally, the big one. For people who want to play the game at its ultra settings. You’ll want the following specs to be able to run the game at 4k resolution, with ray tracing, while still maintaining a high FPS.

As with most games, hitting the recommended requirements these days seems to be a must. With a game that offers as much explosive action as Call of Duty: Modern Warfare, you’ll want to be able to experience it in all its glory.

With the large amount of storage this game needs you may want to think about expanding your systems storage media. If you can invest in a large capacity SSD then this will prove to be a valuable asset for your load times.

Activision has recently clarified the amount of disk space needed stating that “175GB is the storage space we recommend players keep available in order to download the post-launch content we’ll be bringing to Modern Warfare. At launch, the initial download will be smaller”. We’d recommend trying to keep around 175GB free anyway if you are planning on playing this game throughout its updates.

Some of these specs are quite hefty. If you’re looking to run this game at its max then you may want to look at one of our high-end build guides. If you aren’t looking to build your PC component by component, a pre-built PC may be a good option.