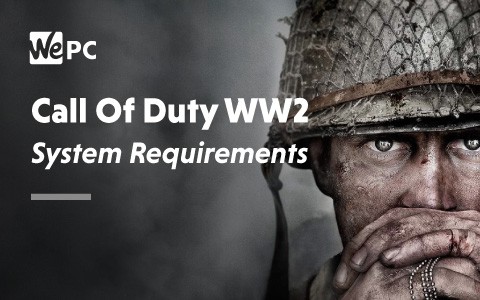 Can I Run Call of Duty WW2?

It’s always infuriating when you purchase a new game only to find that your PC can’t run it comfortably. You can spend countless hours tweaking settings, looking for upgrades or trying to get a refund. In order to prevent any of this happening, it is important to do a bit of planning beforehand.

To discover what specifications your system currently has, take a quick look at our guide. Once you have these, make a note of them because you’ll need to compare them to the minimum requirements of Call of Duty WW2 before you make your purchase.

Don’t worry, we’re in the process of making this easier by developing a tool that automatically grabs and compares this information. It’s still in development stages at the moment but we’ll be sure to let you know once it releases.

If you don’t quite meet the minimum requirements for this game then you’ll definitely want to hold back on your purchase until you’ve made some upgrades. It may still be possible to run this title on the system you have now, but you might have to make some graphical sacrifices in order to do so.

Call of Duty WW2 is the fourteenth installment in the hugely popular Call of Duty series. Set in the European theatre of WW2, the game follows a squad in the 1st Infantry Division and their battles along the Western Front.

During the single-player campaign, you play as Ronald  “Red” Daniels, a U.S. Army Private First Class of the 1st Infantry Division, among other squad members during the Normandy Landings. Afterward, you will take part in many other battles, fighting to survive, with no shortage of action and challenges for you to overcome.

Unlike the previous Call of Duty titles, there won’t be any advanced movement like double jumping or wall running. You’ll instead experience more the traditional gameplay from earlier titles in the series. It’s been described as a return to the roots.

During this campaign, you will have a chance to experience a variety of locations important to the war effort. You will also take part in important historical battles such as the Battle of Hürtgen Forest and the important Battle of the Bulge.

The multiplayer action will make a return to that of previous games, gritty run, and gun action. You’ll have the chance to use a variety of period weapons in a variety of game modes. Scorestreaks will allow you to take control of more powerful weapons such as a Molotov, flamethrower and also rewards such as controlling a fighter pilot for a short time.

Players can take control of one of eight divisions instead of the usual create-a-class system. These allow for more versatile gameplay that will keep you coming back for more.

If your system meets the minimum requirements for this game then that’s great news. You should be wary of going in and maxing out all the settings though, you’ll need beefier hardware to support that. From our estimations, you’ll be looking to get 30-50 FPS on low-medium settings based on the minimum requirements, and this can be greatly affected by the current area you are in.

The recommended requirements are well, recommended for a reason. These will give you a steady framerate while running medium to high graphics which allows you to experience the action in all its glory. You’ll still want to invest in a better GPU though if you’re looking to push towards higher resolutions and ultra settings. The Nvidia GeForce GTX 1080 upwards will give you around 80 FPS during intensive cutscenes and upwards of 140 FPS depending on the rest of your specifications.

Based on the requirements above and with this game being a fast-paced shooter, we recommend aiming for the following build if you’re looking to keep 60 FPS at a 1080p resolution.

If you are looking for some pointers to start your build, we’d recommend you glancing over some of our build guides. For a game of this caliber, we’d probably shoot towards around a $700-800 build if your budget allows it, with the main focus being on a powerful GPU.

This will also put you in good stead for other FPS titles and pretty much most games as long as you keep a careful eye on their settings. Don’t be afraid to lower some options such as post-processing if it gives you a steadier framerate. After all, first-person shooter titles benefit from this the most.