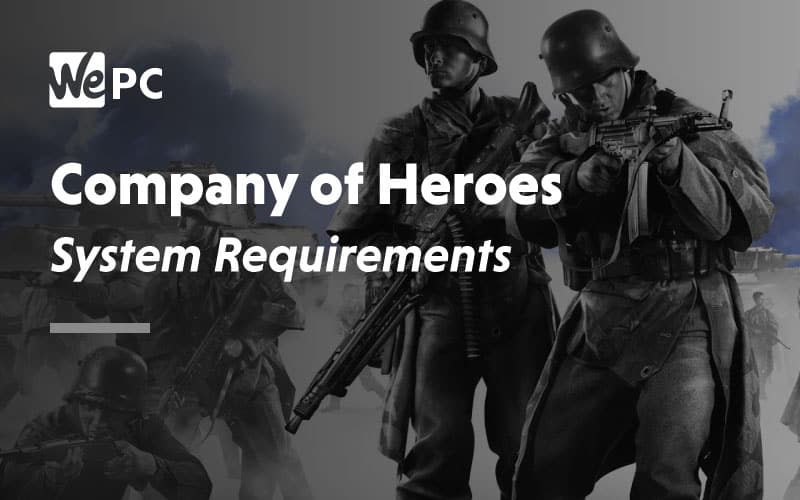 Can I Run Company of Heroes?

Determining whether you can run Company of Heroes depends wholly on your gaming PC’s specifications. As such, you’ll need to find out what these are paying close attention to the CPU, GPU, and RAM.

From there, compare the specifications of your PC to the minimum and recommended system requirements for Company of Heroes. We suggest aiming for above the recommended requirements if at all possible, to avoid any complications when it comes to performance.

We are in the midst of fine-tuning a tool designed to take the hard work out of checking system requirements. It’s still under wraps, but once ready, it will scan any given PC and return a comprehensive list of all its parts for easy reference. We’ll make an announcement once the utility is ready for our readers to use.

Company of Heroes is a classic real-time strategy game pillaging the teeming historical trove that is World War II. It puts players through their tactical paces as they lead a squad of Allied soldiers in battles of the ilk of the D-Day Normandy landing and take on the might of the Nazi forces throughout Europe.

Company of Heroes offers the visceral guts and glory of war condensed into an interactive playground that will please even the most demanding strategy game lovers. No wonder it stands tall as the best rated and reviewed real-time strategy title of all time.

On a more granular level, Company of Heroes offers destructible environments from buildings to vehicles, advanced AI that reacts to changing battle situations, and dynamic battlefields that change as the player’s squad advances.

Company of Heroes offers both a comprehensive single-player campaign packed with a cinematic veneer that portrays the courage of the finest soldiers involved in the world-altering conflict. Alongside, players can take part in 2 to 8 player multiplayer battle either online or via a local network.

Perusing the system requirements shows Company of Heroes’ age, and this works in our favor. We doubt anyone is still running a PC with remotely similar specifications, which means you are virtually guaranteed to run the game without a hint of trouble.

Realistically, any PC from the past 15 years will run the game at 1080p with the FPS skyrocketing past 60 FPS with the settings pushed to their limit. We’re talking about any old potato or dusty laptop from the past decade.

We are hard-pressed to offer any concrete suggestions other than loading up the game, cranking those settings, and for once enjoying a game without worrying about performance.

The only real issue to look out for is turning on compatibility mode in Windows as the game is designed for Microsoft relics Windows XP and Windows Vista.

As we explain above, any modern PC is suited to Company of Heroes, but if you need a push in the right direction, we recommend our $300 build. It’s by no means a powerhouse, but instead, a cost-effective budget build that is ideally suited to less demanding games.

We’ve kept the cost down by using an AMD Ryzen 3 2200G with an integrated GPU, 16 GB of 3200 MHz RAM, and a 240 GB SSD. Not bad for a more than serviceable entry-level gaming PC if you ask us and a build that should also allow you to play a decent selection of modern titles to boot.