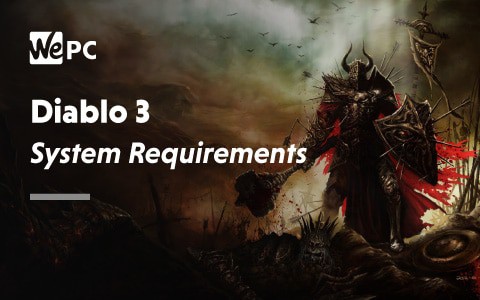 Diablo 3 is a title that has been continually updated since its initial release back in 2012. While many fans of the series will have cut their teeth on earlier classic Diablo games, there is no doubt that this game is a worthy successor deserving of your time. Especially as it is currently sitting as the third best-selling PC game of all time.

The next question you need to ask yourself is, can I actually run it? Sometimes we absentmindedly end up buying a game we are excited to play without even checking if we can play it. If you are looking forward to starting your adventure then make sure you have a quick check that your system can run it smoothly.

Set in Sanctuary, you’ll find yourself exploring the dark fantasy world of Diablo, hacking and slashing your way through hordes of monsters. The core gameplay of this title is similar to that of many ARPGs, but, the ability to change many aspects of your character on the fly is a core part of the gameplay.

Players will have the choice of seven different character classes to choose from: (providing you own all the DLC) The Witch Doctor, Barbarian, Wizard, Monk, Demon Hunter, Crusader and the fan-favorite – The Necromancer. Each of these characters has their own class-specific skills, abilities, and weapons that they may use which adds a massive amount of variety into the game. You won’t be freely switching through these classes often though as a standard campaign can last well over a hundred hours!

One of the key aspects of Diablo 3 is the constant character progression that goes on. As you make your way through the many areas and quests the game has to offer, you will not only encounter a variety of different enemies but also an ever-increasing horde of loot that you will need to pick through. Aside from a number of key legendary items, many weapons are randomly generated and can contain different rolls of stats to go with them.

Many players will tell you that the real fun starts once you finish the main campaign. Although this requires the Reaper of Souls expansion, you will be able to embark on not only an expanded campaign but also a massive ‘adventure mode’ where you will explore a continually scaling level experience that challenges your character further and further.

Last but not least, if you find the game too easy, you can also embark on Diablo’s famed ‘hardcode mode’. This is not necessarily just a difficulty spike though, once you die, that’s it. Your character will be gone forever and you’ll have to start the entire game from scratch. There are plenty of reaction videos online of players losing their favored characters, but the constant pressure to play at your best is what makes this mode so strong.

While this game has gone through many great changes since release, the overall specifications of this title haven’t changed too much. You won’t need a high-end machine to run this game and there isn’t a huge depth of graphical options you can change.

You could definitely get by with a budget PC to run this game, something along the lines of one of our $500 builds would be perfectly suitable. It won’t hurt to have better hardware to run this game, however, just don’t go overboard, if this is the sole title you intend to play, you will see diminishing returns on your components pretty quickly. An $800 gaming build would be a great choice.