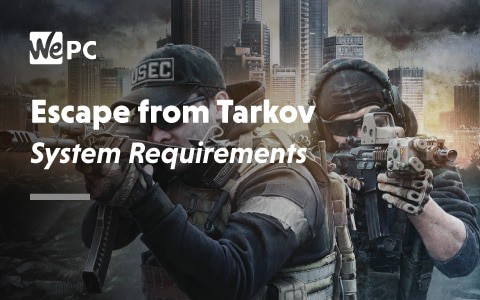 Can I Run Escape From Tarkov?

Whether your gaming rig can handle the demands of Escape from Tarkov all depends on what it packs under the hood in terms of components, notably the graphics card, processor, and RAM. As such, you’ll first need to figure out what these are. If you need a helping hand doing this, you can refer to our guide here.

Once you’ve done this, cross-reference your findings to the minimum and recommended specifications we’ve compiled below. Should they fall below these, you may need to think about upgrading individual components to make your system Escape from Tarkov-compatible.

We hope to release an easy to use tool that will scan your machine for its exact specifications automatically before long. We’re still adding the finishing touches behind the scenes, but we’ll be sure to announce it once it’s ready for use by our readers.

Escape from Tarkov, developed out of Russia by Battlestate Games, is a multiplayer first-person tactical shooter. The game is set in the fictional city of Tarkov in the Norvinsk region, a special economic zone bridging Europe and Russia, that’s fallen into ruin following a political scandal turned violent.

Blighted by war, the area has been sealed off, spawning a multitude of rival gangs, mercenaries, rogue civilians, and a pair of para-military contractors sent in to keep the peace. Players play as a mercenary from one of the military groups and must plot a course out of the Tarkov.

It touts a realistic sim quality through its high difficulty level as well as bringing in elements from massive multiplayer titles and RPG-like features. Upon death, the player loses all their gear and loot forcing them to start anew.

Hyper-realism is mainly achieved through what is coined the Hazardous Environment Combat Simulator where players must not only contend with opponents and AI-controlled feral scavengers eager to gun them down but maintain their character’s health via survival systems that include energy levels, hydration, injury management, blood pressure, exhaustion, and fear-based physical manifestations such as tremors.

Alongside, Escape from Tarkov features real-life ballistics and weapon behavior, such a jamming issues, wear out and overheating. The realism also extends to the environment with a highly dynamic palette of interactive assets such as light switches, doors, lean and prone mechanics, and so on.

Escape from Tarkov incorporates a host of different game modes, including a raid mode called PMC survival, a Scav mode where the player takes on the role of a scavenger, and a limited offline mode. Battlestate hopes to bring in a story mode and arena mode as well as others as development progresses.

The minimum specifications are, by definition, the bare minimum required to get the game to run and be ready to face painfully low frame rates. We’re talking sub 20 FPS at very best with the settings turned down very low. We’d warn against attempting to play as the limited technical capabilities of the setup detract too much from the gameplay experience to make it even remotely enjoyable. As such, bypass the minimum specifications entirely and aim for the recommended specifications as a starting point.

Our only real concern with the recommended specifications is the rather ambitious 8 GB. Escape from Tarkov is notoriously dependent on RAM and has been known to require at least 10 GB of DDR3 to run smoothly. Consequently, we recommend 16 GB as a minimum to avoid any potential issues. Aside from this, the Core i5 and i7 at least 3.2 GHz, alongside a 2GB GPU, produces more than decent performance with FPS ranging anywhere from 30 to 80 depending on resolution and settings.

Additionally, Escape from Tarkov involves a lot of asset and terrain loading, so we’d highly push you to use an SSD if at all possible.

We’ll also point out that Escape from Tarkov has quite an extensive set of settings. Turning off features like anti-aliasing, the noise filter, chromatic aberrations, SSR, SSOA, and shadows can boost that FPS count significantly.

The recommended specifications will get the game running well, but what we all want is the very best, right? With that in mind, here’s our take on what you’d need to amp up those settings and run at 1080p/1440p with high frame rates.

If you want something similar, take a look at our $600, which is more than capable of offering a stellar Escape from Tarkov experience. As always, without a budget limiting your setup, you could always jump to an RTX, 32 GB, and a better processor for an even smoother experience.