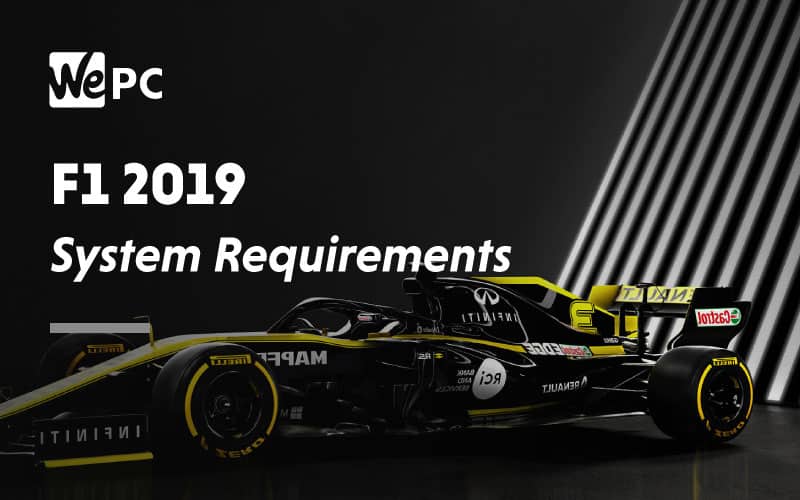 The first step to determine whether you can run F1 2019 is to know what components make up your gaming PC. Pay particular attention to the CPU, GPU, and RAM as these tend to dictate what kind of performance you can expect. If you’re not sure how to go about this, you can refer to our step-by-step guide right here.

Armed with your PC’s specifications, compare them to the minimum and recommended system requirements for F1 2019. You can find these below. The recommended requirements are what you should always aim to match to avoid any issues. If your PC falls short, a few choice targeted hardware upgrades may be worth considering.

Moving forward, we plan on publishing a bespoke tool designed to automatically scan any given PC for its full specifications. The idea is to take the tedium out of the task for our readers. It’s still under wraps, but we’ll be sure to push out an update once it’s ready for action.

F1 2019 is the official game of the 2019 FIA Formula One World Championship. As the name suggests, players can live out their F1 fantasies as any of the professional drivers and teams that make up the highest echelons of the sport, racing on any of the official 21 circuits.

Taking the foundations of last year’s edition, F1 2019 ups the graphics with lush environments and detailed circuits with a heavy emphasis on realism. The gameplay follows suit with a firm rooting in simulating the genuine F1 driving experience.

Alongside, players have customization at their fingertips, whether it comes to their livery or racing style. F1 2019 boasts no less than 22 cars to choose from, including a selection of classic models from yesteryear and seminal motors like the Ferrari F1-90 or the McLaren MP4/5B.

For the first time, developer Codemasters is also throwing in an F2 mode whereby players can start their racing career in the lower division before jumping up to the big leagues and taking on household names like Lewis Hamilton.

As is customary, F1 2019 features a rich online multiplayer experience where players can play against the best drivers across the world, while also creating their own tournaments, taking on weekly challenges, and the like.

It’s the most forward-thinking and definitive take on F1 racing in video game format, and rave reviews attest to this with a firm 87 score on Metacritic.

Aside from the beefy 80 GB of storage space and a higher than usual 8 GB of RAM, the specifications aren’t all that demanding when you consider how good F1 2019 looks.

Like most titles, the minimum requirements line you up for a solid 30 FPS using a 720p resolution with the settings hovering around low. But, there’s space for maneuvering and tinkering with the settings to either up the visual quality or frame rate based on personal preference.

The jump to the recommended requirements isn’t negligible, notably the 16 GB of RAM, which very few titles require, and the need for a mid-range NVIDIA GeForce GTX 1660 Ti or AMD Radeon RX 590. With more power comes greater performance, and you can expect to hit 60 FPS with the resolution cranked up to 1080p or higher with the settings on high or ultra based on your specific machine.

As above, messing around with the settings can improve things considerably, so don’t hesitate to test a few permutations if the FPS or graphical quality isn’t to your liking from the get-go.

As a racing title firmly rooted in the simulation tradition, it would be criminal not to play F1 2019 with near-flawless performance, especially if you’ve invested in a wheel and pedal accessories. With that in mind, we recommend taking a look at our $700 and $800 builds.

The $700 PC matches the recommended requirements with an AMD Ryzen 5 2600X CPU and 16 GB of RAM. The only difference is that we’ve put in a Gigabyte GeForce GTX 1660 Super Gaming OC 6G, which is only ever so slightly less powerful than the Ti variant.

The $800 build consists of a more powerful Ryzen CPU while matching the recommended requirements’ NVIDIA GeForce 1660 Ti GPU. With this one, you’d get a bit more power to push for higher resolutions on ultra settings.