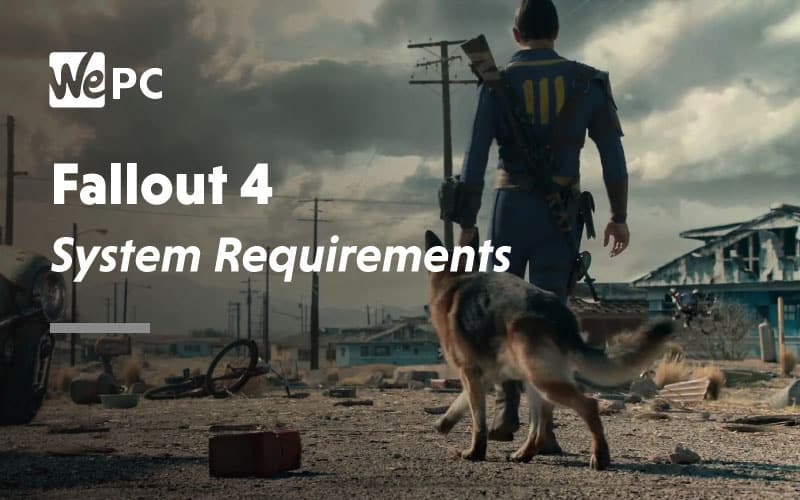 Can I Run Fallout 4?

Tempted by the post-nuclear thrills of Fallout 4, but have some lingering questions about whether you’ll be able to run the game on your machine? First, you’ll need to check on the hardware components that make up your gaming rig. We’ve compiled a great, easy to understand guide right here, so if in doubt check it out for the exact step-by-step process.

From there, it’s a case of perusing the minimum and maximum specifications we’ve listed below for easy reference. If they match up, then Fallout 4 should work great. If they exceed the specifications, then you’re in luck, the game will run like a dream.

As a side note, we’re currently developing a brand new feature that will automatically check your PC for its hardware specifications. We aim to make the process a whole lot easier for gamers out there. We’re still hard at work adding the nuts and bolts, but we’ll be sure to share the good news once it’s ready for our readers to use.

Set in the devastated post-nuclear apocalyptic climes of Boston and the broader New England area in the year 2287, Fallout 4 follows in the rich tradition of previous entries in the franchise, most notably Fallout 3. The player takes on the role of the Sole Survivor of Vault 111, a nuclear shelter where its inhabitants are cryogenically frozen with the idea being to awaken them in the distant future when radiation levels have subsided to livable levels.

Dealing with the death of his wife and the disappearance of his son, Sole Survivor edges back into a ravaged world of ruins and bizarre aberrations, the fruit of years of nuclear radiation affecting the local fauna and flora. With the help of a snarky robot and a trusted dog by his side, the player then embarks on an epic journey of seedy institutes, malevolent enemies, synthetic humans, teleportation, and all manner of Fallout flavored oddities.

Through base-building, a branching dialogue system, a character progression system, crafting, weapon customization, and looting, the player must chart a course through the dense wasteland of New England fighting off mutants, mole rats, and all manner of nefarious enemies.

Although Fallout 4 can’t be described as the most visually alluring game ever made, it is an exercise in substance over style, with a veritable glut of content and a vividly portrayed world full of interesting characters to meet.

As you can see the minimum specifications for Fallout 4 aren’t excessively demanding and many of the components listed fall nowadays into the budget category, most of which aren’t even widely circulated anymore. It shows the age of the game, but it’s a plus for anyone with an aging PC.

Fallout 4 is a GPU intensive title due to the demands of higher draw distance inherent to open-world titles. This means that you shouldn’t expect frame rates higher than 30 FPS at best with those components, and be prepared to lower the settings right down for a decently fluid experience. The game isn’t exactly pretty, so you aren’t missing much by toning down texture details and shadow settings. We’d recommend at least 3GB of VRAM to make the most of the game, but 2GB is more than serviceable if you don’t mind toning down the quality somewhat.

As for the recommended specifications, you can expect a stable 30 FPS on ultra settings at 1080p with some fidelity; it might waver in certain situations but should remain stable for the majority of a playthrough. Obviously, tinkering with the settings, especially lowering the resolution, can provide better results, and even a jump down to high settings can significantly up the frame rate count considerably.

The recommended specifications are a decent way to experience Fallout 4, but if you are pushing for 1440p on ultra settings with more than 60 FPS average then we would at the very least recommend the following:

If you need some inspiration, we recommend taking a gander at our $600 and $700 build suggestions. As always, the more money you put into a rig, the better a game will perform, and the rule applies to Fallout 4, so the skies the limit in terms of what we can recommend.