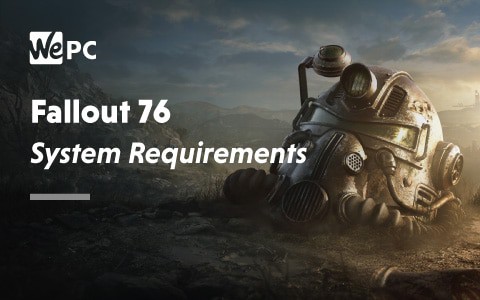 Successfully running Fallout 76 depends significantly on the specifications of the PC you’re hoping to use to play the game. The internal hardware components will determine how likely it is to handle the demands of Bethesda’s latest title.

To begin, you’ll need to establish exactly what your PC boasts under its case. Once you have a list of all the components, cross-reference these to the minimum and recommended system requirements we’ve compiled further down. If they fall below the minimum specifications, unfortunately, your PC will need some upgrades to run Fallout 76.

To make the process easier, we’re hoping to release a utility that will automatically scan PCs and compile a list of specifications to make the process a whole lot more straightforward. The tool is still in the development phase, but check back regularly for updates as we’ll be sure to share the news as soon as its up and running.

The familiar Fallout setting of a post-nuclear world returns, this time in the year 2102 and exploring the verdant forests and mountains of West Virginia and all the mythical folklore emerging from that corner of the East coast of the US. Players can play by themselves or team up in squads of up to three players on dedicated public servers. They take on the role of a Vault 76 survivor who ventures back into the world after 25-years underground.

The basic gameplay loop revolves around PvE and PvP combat, quests, base building, crafting, and exploration. Players can customize their characters through the SPECIAL progression system, where they can collect skill points as they level up and use these to secure perks in the form of trading cards that enhance stats such as strength and intelligence among many others.

Fallout 76 didn’t have the best launch by anyone’s standards, but Bethesda has been hard at work releasing a slew of updates that have added quite a bit of depth to the game including NPCs, a battle royale mode, and more. There’s never been a better time to dive in and experience Fallout in multiplayer.

As always, the minimum specifications are the bare minimum to play the game in a reasonable state. By today’s standards, they are quite high, especially on the CPU side. An Intel Core i5 as a basic requirement is quite the ask, but fortunately, the GPU demands counteract this with a very reasonable GTX 780 or Radeon RO 285.

To get the most out of the minimum specifications, we recommend turning the settings down to medium and turning off embellishing processes like shadows, anti-aliasing, and reflections altogether. Doing so will boost the FPS rate considerably and make for an all-round fluid experience. We would say a stable 30-50 FPS is expected but can vary based on the setup.

The recommended specifications are quite a leap upwards from the minimum requirements but will make a significant difference in hitting those sweet-spot FPS rates at higher settings. Once again, the CPU demands are higher than those of the GPU.

The storage space requirement is pretty high at 71 GB, so we’d recommend a good clear out of any old titles you haven’t touched in a while before installing Fallout 76.

The Intel Core i7-4790 stands as a reliable option for getting the most out of Fallout 76, so there’s no point interfering there. Where we would up the stakes is the GPU. If you want to use ultra settings at 1440p with decent FPS, then we recommend an NVIDIA GTX 1060 3GB or AMD Radeon RX 570 4GB. We’d also up the RAM to 16 GB to avoid any memory issues.

If you need a little more of a push in the right direction, a good option is our $700 build. It will run Fallout 76 with buttery smooth FPS, even when pushing the resolution and in-game settings, without completely breaking the bank. It should also put you in good stead to play a wide berth of other contemporary titles.