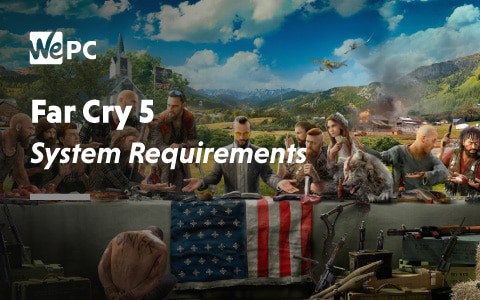 If you’ve been excited to play Far Cry 5, one of the first questions you may ask is will I be able to run it on my computer? We’ve put together a breakdown of all the system requirements for this game below.

It’s important that you always check your hardware components before you pick up a game like this. First of all, here’s an introduction to the game itself:

Set in Hope County, a fictional part of Montana, US, a doomsday cult has taken over the county with the help of a charismatic and powerful leader. This is nothing out of the ordinary for the Far Cry series, but this time it sets out to mirror a lot of real-world stories.

The story follows an unnamed junior deputy sheriff who is trapped in Hope County and has to work with members of the resistance to overthrow the rule of Eden’s Gate. Players will do this is in classic Far Cry style by starting off from scratch and working their way up the skill trees, building a competent killer character along the way.

The gameplay in this title is focused on exploration and combat, with players battling soldiers of Eden’s Gate using a variety of weapons. There is a branching storyline with side quests, a map editor and multiplayer mode – features common to other role-playing games.

With the minimum requirements for Far Cry 5 set pretty low, you should be fine with something around the budget gaming PC region. A fairly low-end gaming PC should be able to handle Far Cry 5 at the low graphics settings.

However, if you want to take advantage of the visuals offered by Far Cry 5, then the low graphics settings simply won’t do. It shouldn’t take much more to push this game to a state of beauty, but you’ll need to take care to ensure your system can still run this at a stable FPS – this is a first-person shooter after all!

As for RAM, the minimum requirements and recommended don’t differ here, but if you have more than the recommended in your system then it won’t hurt. After all, we know gamers love to push their systems to the limits, even if you don’t hold all the hardware in the recommended category, with some tweaking you’ll still be able to get good results.

We’d always go with the recommended system requirements for the best way to enjoy the game, after all, nobody wants to play this game on ‘low’. In the case of this title, we would recommend the following:

With the above specs, you may not be able to enjoy the game at a solid 60 FPS on Ultra but with some tweaking, you will still be able to play the game on high settings with a stable FPS.

With requirements like this, we’d recommend looking at gaming PCs within the $600 to $700 mark. As always, if you are looking for suggestions on what to build, check out our ‘Prebuilts’.

It probably goes without saying, the more money you’re willing to invest in a rig, the better your game performance will be. I wouldn’t go too overboard if your main aim is to play this title though, there are other games out there that benefit more from the extra power.