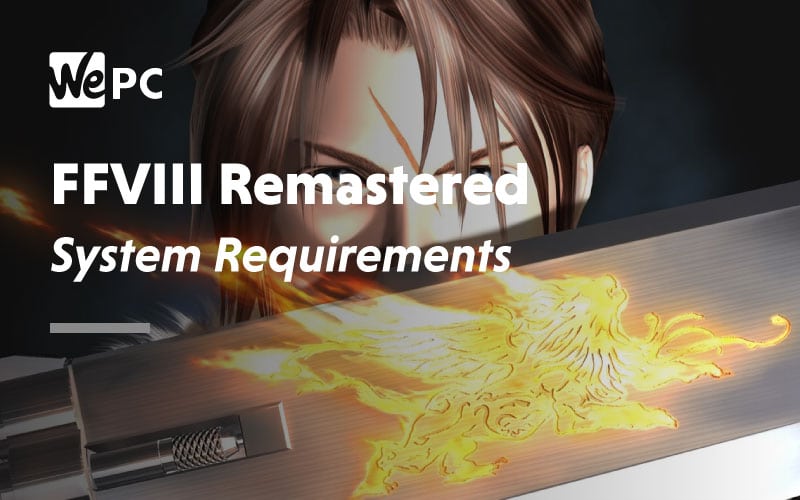 Can I Run Final Fantasy 8 Remastered?

Determining whether you can run Final Fantasy 8Remastered depends entirely on the hardware components that make up the gaming rig you’re hoping to use to play, notably the GPU, CPU, and RAM.

To begin, find out precisely what hardware you have. If you need a hand doing this, you can refer to our step-by-step guide right here.

From there, cross-reference the results to the official minimum and recommended system requirements for Final Fantasy 8 Remastered, which we’ve conveniently listed below for convenience. We suggest trying to hit the recommended settings if at all possible, to ensure a pleasant experience.

We aren’t the biggest fans of how tedious figuring out game compatibility can be, and with that in mind, we are working on a tool to make the process a whole lot more straightforward. Our bespoke utility will scan any given PC automatically and list the components in easy to digest form. It’s still being worked on at the moment, but we’ll be sure to post an update once its up and ready for our readers to use.

Final Fantasy VIII Remastered takes all the RPG goodness and splendor of the original and props it up with modern visual enhancements, notably in the form of a welcome visual HD upgrade, improved character models, and a slew of quality of life improvements.

Among them is a new battle assist option with boosts to HP, ATB, Limit Break, the ability to up the game speed by three times that of the original, avoid random encounters entirely, and what we’d call strategic ‘cheats’, which grant all items, abilities, infinite gill, spells, and more.

The story mimics the original and follows a gaggle of mercenaries as they quest to defeat sorceress Ultimecia, with some romance, moral quandaries, self-discovery, and a healthy dose of turn-based combat thrown in for good measure.

Although Final Fantasy 8 Remastered features HD graphics and improved character models compared to the original 1999 version, the requirements aren’t all that demanding. We’d wager that most machines from the past half-decade will handle Final Fantasy VIII Remastered more than adequately.

Note that the storage space requirement is only 5 GB, which is a welcome change from the 50 to 100 GB needed for numerous modern titles. Very much the same can be said for the RAM count, which maxes out at a reasonable 4 GB for the recommended requirements.

The minimum system requirements will land you 30 FPS at 720p with the settings on low. We’d warn against using an integrated GPU, but anything from a GeForce GT 730 upwards will handle the game well.

The recommended system requirements are geared towards 60 FPS at 1080p with the settings on high or even maxed out. The CPU jumps from a Core i3 to Core i5 but remains entirely reasonable.

With the idea of having a dedicated GPU, while also throwing in a degree of flexibility with more demanding games, we recommend our $500 build. It’s a cost-effective build with an AMD Ryzen 5 2600, Radeon RX 570 with 8GB of VRAM, and 16 GB of RAM.

Anything more is a little overkill for Final Fantasy VIII Remastered, so it’s not really necessary unless you have ambitions of playing demanding modern games on the same machine.

Thomas is a UK-based writer with an unhealthy obsession for video games kick-started by a transformative play-through of Metal Gear Solid. These days you'll find him beating Sekiro: Shadows Die Twice for the umpteenth time, praising the merits of AA titles like A Plague's Tale: Innocence, or enjoying the soothing whimsical antics of Stardew Valley.