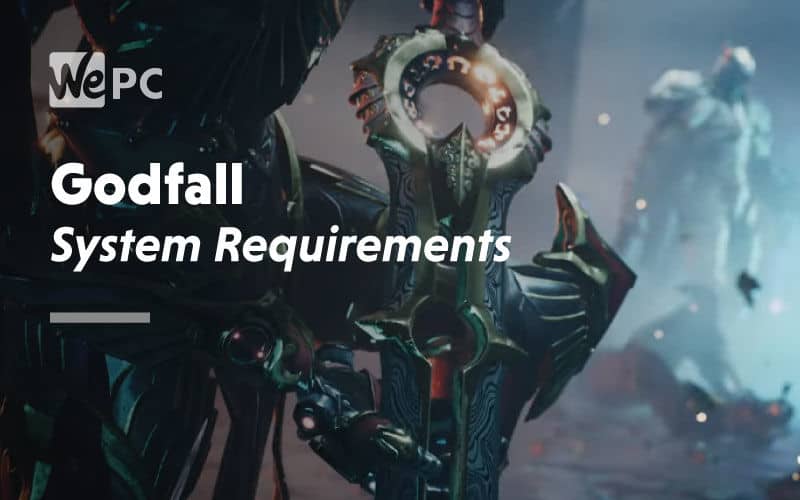 Can I Run Godfall?

As a first step to figuring out whether you can play Godfall on your machine, you need to know what components you have with a notable emphasis on the CPU, GPU, and RAM. These widely determine if and how well the game will run.

If you need help doing this, you can consult our easy to follow, step-by-step guide right here.

From there, simply compare your findings to the minimum and recommended specifications for Godfall we’ve compiled below to check whether your gaming rig is up to the task. As a general rule, we suggest aiming to meet or surpass the recommended requirements to avoid any performance issues. If your hardware falls short, then you’ll need to consider an upgrade.

To make the process easier and take some of the tedium out of the whole task of checking system requirements, we are developing a tool designed to automatically scan your machine, then list a detailed breakdown of all the components. It’s still cooking away in the great WePC forge at the moment, but rest assured we’ll be sure to publish an update once it’s fit for purpose and ready for our readers to use.

Termed a “loot-slasher” by publisher Gearbox Publishing, Godfall is a third-person title that sees players engage with a fantasy world of knights, arcane magic, towering enemies, and looming era-appropriate architecture. The world itself is divided into elemental realms, including earth, water, air, fire, and spirit.

Players select an initial character from three heroes, each one the last remnants of the exalted Knight’s Order entrusted with the gargantuan task of avoiding the apocalypse and maintaining their world as they know it.

Keeping with Gearbox tradition, much of the game will center around defeating enemies to secure loot to improve weapons and armor known as Valorplates to then take on even more powerful foes.

The combat is melee-focused with what Counterplay Games calls high-impact action. Weapons will range from heavy to light weapons with everything in between to give players a wealth of options as well as Augments that can be slotted to change the way each weapon plays.

Although Godfall can be played solo, co-op is very much encouraged with a quick join feature and the ability to team up in three-player co-op play.

Aside from bringing a brand new IP inspired by the likes of Isaac Asimov’s Foundation saga and Brandon Sanderson’s The Stormlight Archive, Godfall will showcase the full power of the next-generation PlayStation 5 console while simultaneously coming to PC.

Given that Godfall has only just been announced and we’ve received nothing more than a short CGI trailer and few screenshots, official system requirements are a way off as it stands. As such, the above system requirements are informed predictions rather than definitive. They are likely to evolve somewhat as we receive more information about Godfall in the lead up to release.

We estimate that with the minimum system requirements, you can comfortably aim for 60 FPS with a resolution of 720p with the settings on low to medium. Neither the CPU or GPU are unusually excessive, but then again, don’t expect the game to truly shine on what is effectively the bare minimum to get it running in a just about palatable, if imperfect, state.

Moving up to the recommended system requirements, the performance jump should be notable, and the specifications follow suit (note the 16 GB of RAM). You can expect to net above 60 FPS at 1080p with the settings maxed out. It’s unclear how 1440p and 4K will factor in, but the demands will invariably move upwards when pushing for those higher resolutions.

As above, this remains guesswork at this point but pushed we recommend our $1000 build as a firm foundation to play Godfall. The rig packs a lot of power for the price thanks to the selection of cost-effective components. We anticipate maxing out Godfall settings to reach 1080p with 60 FPS or more.