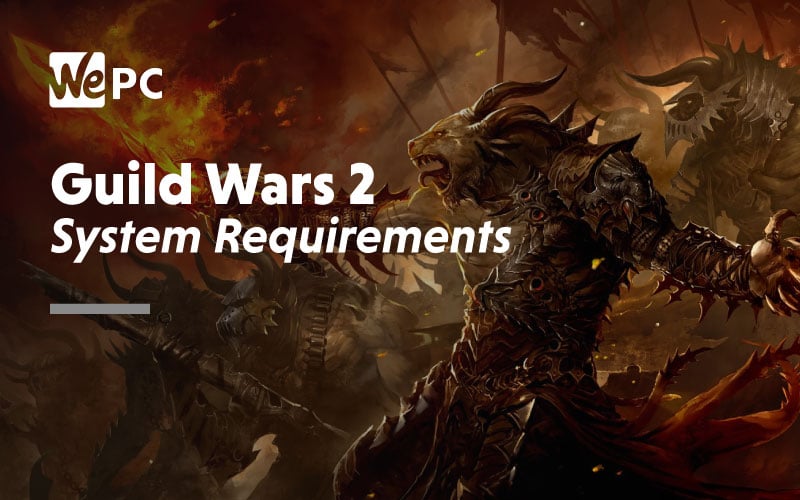 Whether you can run Guild Wars 2 depends entirely on your PC specifications. You’ll first need to determine what these are, notably the CPU, GPU, and RAM count. If this all seems alien to you, check out our easy to follow step by step guide right here.

Moving forward, we aim to simplify the process through a bespoke scanning tool that will automatically retrieve PC specifications. It’s still in development as of writing, but rest assured, we’ll provide an update once the utility is primed for action.

Guild Wars 2 is a fantasy MMORPG that takes place in the fictional world of Tyria where ancient dormant Elder Dragons have surfaced to wreak havoc and displace entire populations. The player is tasked with reforming a disbanded guild known as Destiny’s Edge and, by extension, reunite the various warring factions with Tyria.

The player can choose one of five different races (humans, charr, asura, norn, and sylvari) and specialize in one of eight professions broken down into scholar, adventurer, soldier classes.

From there, players develop skills and level their character in true RPG fashion by taking on quests, engaging in PvP combat, and exploring the lands of Tyria. Guild Wars 2 world is persistent and player actions have an impact on how the narrative evolves, so quests can be approached in a variety of ways.

With four seasons of extra content packed into Guild Wars 2 since launch, it is widely considered among the best multiplayer RPGs for its novel take on reducing the grinding aspect of similar titles and offering up a dynamic living world that encourages interactions between players and a sense of community.

Fruit of its age, Guild Wars 2’s minimum requirements are as undemanding as they get. Chances are your machine with dwarf those of the minimum specifications, even if it sports a modern integrated GPU like the Intel Iris.

Sticking to the official requirements, these will produce 20 FPS at 800×600 with all settings on low. As if often the case, these requirements are the bare minimum to get the game to run and don’t offer anything resembling a worthwhile game experience.

As we mentioned, it’s highly unlikely your machine has hardware even remotely as bad as these. Let’s face it; these are the components you’d find in a potato. As such, you can more or less expect the game to run significantly better. We recommend tweaking the settings until you land on a happy medium between the FPS rate and resolution.

Guild Wars 2 is very CPU dependent due to the nature of the game. If you are toying with the idea of an upgrade to boost the game’s performance, the processor should be your first port of call.

For a 1080p, 60 FPS +, ultra settings experience, we recommend the following specifications. As above, you can take a hit on the GPU in favor of a better CPU. We also highly suggest using an SSD if at all possible.

Short of that specific setup, our $600 build is more than enough to push Guild Wars 2 to the limit with some room to spare if you want to mess around with 1440p at reduced settings.