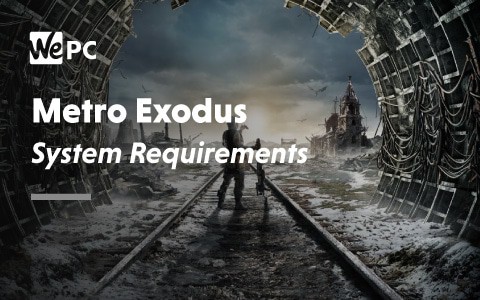 Can I Run Metro Exodus?

Getting Metro Exodus up and running on your gaming rig all depends on the hardware it houses. You’ll first need to figure out precisely what components it has, focusing mainly on the GPU, CPU, and RAM. If you require a helping hand, refer to our easy to follow, step-by-step guide right here.

With your specifications in hand, scroll down lower on this page to the minimum and recommended specifications for Metro Exodus, then cross-reference the two. If they match, you should be in good stead, if not, you might want to explore upgrading flagging components.

In an effort to make the whole process of checking system requirements significantly easier on our readers, we are developing a tool that will automatically determine the hardware for you, then list them for easy digestion. It’s still under wraps as of writing but check back for an update in the not too distant future.

The third and most recent entry in the acclaimed Metro franchise, Metro Exodus is a narrative-driven first-person shooter that marries elements of stealth, horror, and survival.

Set in post-apocalyptic Russia in the year 2036, Metro Exodus sees the player take on the role of survivor Artyom as he attempts to flee Moscow’s metro system in search of survivors above ground in the east.

The metro has served as a refuge for survivors against the ravaged outside world teeming with mutated beasts and otherworldly horrors, but infighting has led to disillusionment and fractures within the group.

At the head of a squad of Spartan Rangers, equally eager to escape Moscow, Artyom embarks on a year-long trek across the poisoned expanses of wintery Russia, discovering a world changed by war, but still fighting for survival. Decisions have repercussions, and one wrong move could lead to an untimely end to Artyom’s journey.

The gameplay is heavily survival and combat-based with both AI enemies and the environment to contend with, including radiation, mutated humans, and warring factions. Fortunately, the player can use a cluster of hand-made weapons obtained through scavenging and crafting to navigate Metro Exodus’ careful balance of open-world and linear sections.

For a game as visually stunning as Metro Exodus, beefy requirements are par for the course, and the minimum/recommended specifications don’t disappoint on that front. We won’t mash our words here; you’ll need a powerful PC that packs some brute force to get the very best out of the game.

As far as the minimum specifications go, 4A Games has done well to optimize the game so that these offer a stable 30 FPS at 1080p, but the compromise is all the settings on low. This isn’t as bad as it seems as even on low, Metro Exodus is still graphically pretty impressive. You could equally drop down to 720p and up the settings to medium while again hitting a decent 30 FPS average.

The recommended specifications are geared towards 60 FPS at 1080p. High settings work reasonably well with FPS rates up to 60 and never going any lower than 30 FPS. For the frame-hungry out there, dialing down the settings to medium lands a buttery smooth 60-70 FPS pretty consistently.

As for higher resolutions, the recommended specifications can run on 1440p at 55 FPS with the settings on medium. High is possible, but the lower FPS spectrum veers into an unsavory 20-ish territory, which is too stark a contrast to the top count of around 45 FPS. The difference will result in a jarring seesawing of frames that detracts too much for our liking.

Once again, the developer has done an excellent job of optimizing Metro Exodus, so even though the demands are comparatively high, even for the minimum specifications, the results are more than satisfactory for a gaming experience worth your time. The point is that these two profiles offer excellent Metro Exodus performance for your money.

Should you want to push for 4K at 60-70 FPS with ultra settings, then you are looking at an Intel Core i9-9900K, 16 GB of RAM, and wallet-busting NVIDIA RTX 2080Ti combination. It’s pricey, but Metro Exodus looks absolutely spectacular.

In all honesty, it comes down to personal preference. Fluid gameplay is essential, but there’s an argument that graphical fidelity has an even bigger influence on immersion. A happy medium between the two seems like the best course of action, and we’ll base our recommendation on that.

This represents an ideal configuration, so feel free to shift to a slightly lesser/better CPU/GPU combo to suit your particular needs and standards.