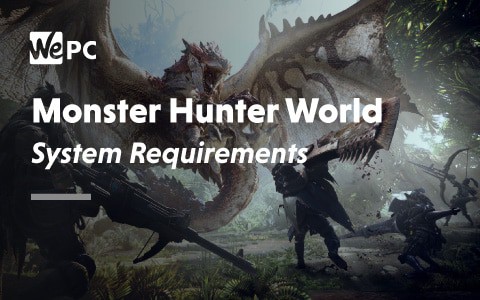 Can I Run Monster Hunter World?

Whether your PC can handle Monster Hunter World depends on how well it stacks up to the minimum and recommended system requirements released by developer Capcom. As a first step, you’ll need to know what components your machine has under the hood. If you’re unsure how to do this, you can check out our step-by-step guide right here.

From there, cross-reference your findings to the specifications we’ve listed below. If they match or exceed them, then you’re in luck, and Monster Hunter World should work nicely. Otherwise, you may want to consider an upgrade to get your machine up to par.

In an effort to simplify the process for our readers, a new bespoke tool is in the works. It will automatically scan your PC and come back with a detailed list of hardware components, which should make matching them to specific games a lot faster. The utility is still being worked on behind closed doors here at WePC towers, but rest assured, we’ll let you know once it’s ready via an update.

Monster Hunter World is a third-person action-role playing game set in a fantasy world teeming with all manner of beastly entities ripe for hunting. Set in a land simply knowns as The New World, hunters must get to the bottom of the strange migratory patterns of the elder dragons as part of a fleet of the Research Commission. As you’d expect, a simple recon mission transforms into an epic journey.

The player takes on the role of a hunter and must complete quests to hunt down and trap specific monsters in a variety of unique habitats in exchange for resources to improve gear and hunt even more massive beasts.

This notion of improving weaponry and armory is central to the game and grants access to even more daunting monsters, which in turn opens the door to even more menacing targets to hunt down.

Monster Hunter World offers players a selection of fourteen unique weapons to choose from, each with special attacks and characteristics suited to different play styles. There are also several specialized tools to ease the hunt and navigate the oft-treacherous environments of the  New World. Each player also befriends a Palico a pocket-sized sidekick that helps out in battle.

Monster Hunter World is predominantly a single-player affair, but players can team up in co-op squads of up to four players as well.

Despite offering up some stunning vistas and locales teeming with character and detail, Monster Hunter World remains relatively reasonable in terms of demands. In other words, you won’t need an absolute brute of a machine to have a good time of it.

The minimum specifications are geared towards a steady 30 FPS at 1080p on low settings. FPS can waver anywhere from the high thirties to low twenties depending on in-game activity, but it’s all pretty consistent. As always, you can dial down the resolution to 720p and up the settings to medium and still manage around 30 FPS.

The recommended specifications reliably hit 30 to 60 FPS at 1080p with settings on high. The wide range of FPS results comes down to granular differences from build to build. As above, you can tone down the resolution to 720p or lower the settings to medium to push FPS counts upwards.

With the recommended specifications, you could even go for 1080p on the highest settings and still land around 30 FPS quite comfortably, which is a testament to the excellent job Capcom has done to optimize Monster Hunter World.

The recommended specifications are more than enough to experience Monster Hunter World in all its glory, and we are hard-pressed to suggest anything else. But, for the sake of example, here’s what we’d go for if we wanted 60 FPS at 1440p with settings on ultra.

A more reasonable configuration would be either our $700 or $800 builds.