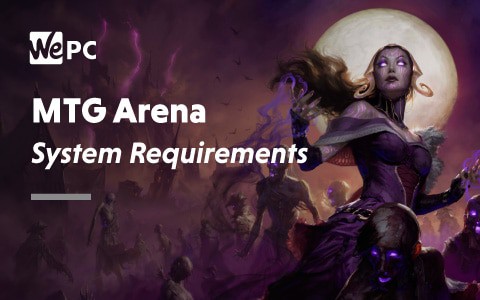 Can I Run MTG Arena?

If you are looking to play one of the world’s most successful trading card games on PC then now is the right time. MTG Arena has recently come out of its beta status and will be getting continuous updates as the new tabletop sets are released.

As this is a free to play title, you could simply load it up to check, but if it doesn’t end up working then you’ll have simply just wasted your time. It’s always good to have an idea of your system specifications and what they can or cannot handle. If you aren’t sure how to find this out then take a quick look at the following guide. Make sure to make note of your specifications so you can compare them to the minimum and recommended specifications below.

We are currently working on a bespoke tool that will allow you to do this automatically for your system. This tool is being worked on as I type, don’t worry, we’ll keep you updated on it as it develops. For now though, just compare your specifications to the ones below to give yourself a better idea.

MTG Arena is a digital adaptation to the tabletop card game we all know and love. It is a free to play title that allows you to craft your own decks from a pool of all of the current standard sets available. All the game mechanics from the tabletop version are present here alongside some pretty impressive special effects to spice things up a bit.

Players will be able to compete in both constructed events alongside limited events such as draft and sealed. These events will reward you with a varying amount of cards, gold and gems upon completion. As with most free to play games, MTG Arena uses the popular freemium platform for its world. Although it is one of the more accessible free-to-play games, players will still be able to purchase gems in order to speed up their progression. These gems can still be won from events, however. Gold can be earned through a rotating pool of daily quests as well as winning duels against opponents.

All of the sets that release on the tabletop version will also be released on MTG Arena at the same time. This makes playtesting decks, theorycrafting or even just being able to access cards that might be too expensive in real-life all the more fun.

This is also an online-only title with no single-player campaign. There is plenty of flavor on offer here though, with card art being more prominent than in previous titles as well as special effects on some of the rarer cards. Players will start to feel immersed in no time.

MTG Arena isn’t the most challenging game to run – in fact, most laptops with only a built-in graphics card will be able to handle it just fine. There are a couple of options you can tone down if you start to have trouble, but the difference between running the game in low and ultra is negligible.

Being a turn-based card game, FPS isn’t vital here. You may encounter a bit of stuttering here and there if you only meet the minimum specifications, but with most desktop systems these days meeting the recommended system requirements, you shouldn’t have much trouble running this title smoothly.

Based on the recommended system requirements for this game, you’ll likely only need a budget system to enjoy it to its fullest. This isn’t to say that that’s all you should be aiming for though, if you are looking to run more graphically intensive games, you might want to aim for a mid-range system if budget allows. The below components is what we’d recommend if you are solely looking to play MTG Arena.

This is a good enough starting point to go off if you need to purchase a brand new system. As we said though, most modern laptops will likely have little trouble running MTG Arena.