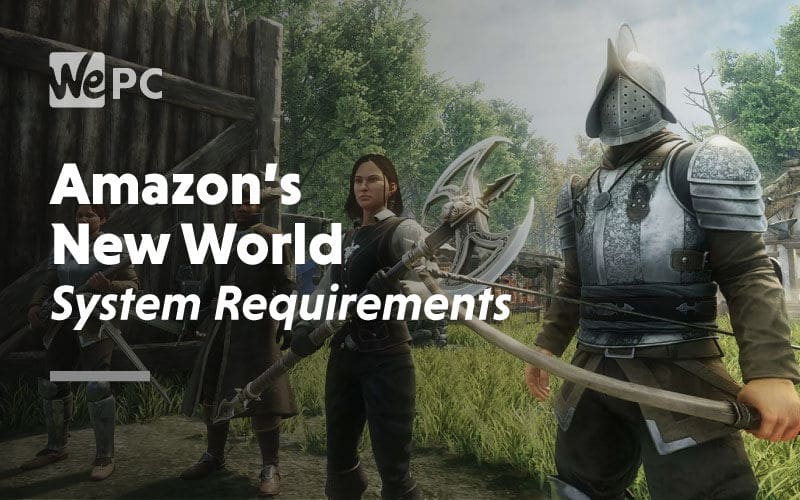 Can I Run New World?

To determine whether your gaming PC is up to the task of running New World, we first need to know precisely what components are housed inside your gaming rig, notably the CPU, GPU, and RAM count. If the doing this appears a bit too daunting, we’ve compiled a step-by-step guide, which you can check out right here.

With your specifications in hand, cross-reference them to the minimum and recommended requirements for New World, which we’ve listed below for convenience. We suggest trying to hit the recommended requirements if at all possible. If you fall anywhere short of these minimum specifications, you may want to consider a targeted upgrade of one or two components to compensate.

We’re not fans of how convoluted figuring out whether this or that game can run on a given machine. In our estimation, it should be much easier than it currently is.

In that spirit, we’re aiming to make the process simpler for our readers, and we are hard at work developing a system requirements tool. When it’s up and running, it will automatically scan a PC and conveniently list all the specifications. It’s still being developed over at WePC towers, but we’ll be sure to publish an update on the site when it’s ready to go.

Developed by Amazon Game Studios, New World is the e-commerce giant’s first game beyond small fry mobile games and promises to offer players a sprawling fantasy MMORPG. It will also determine whether Amazon has the chops to expand into the fiercely competitive gaming sphere with any degree of success.

The action takes place in the 17th century on a fictionalized landmass off the coast of the modern United States on a cursed island known as Aeternum. Ambitious settlers have flocked there for centuries due to a mysterious power that promises immortality. Drawn to this dark and age-old power, newcomers are met by ancient warriors corrupted by the power into living dead with whom they wage battle to seize control of the island.

Primarily a survival title, New World sees players vie for control of scarce resources, battle fantastical creatures, and the aforementioned living dead while warding off Aeternum’s redoubtable wildlife. Crafting, resource gathering, combat, and exploration define the main gameplay loop with players offered the possibility to either battle one another or team up in Companies.

Companies are settlements where each player takes on a defined role, including artisans, traders, soldiers, and more. A clearly defined hierarchy and cooperation through defined roles will lead to success.

Although Amazon Game Studios has pushed a vague May 2020 release window, those that lay down their cash ahead of release for pre-orders can jump in early via a beta set to start from April 2020.

Ahead of release in May 2020, Amazon Game Studios has released the minimum and recommended requirements for New World. They are comparatively tame by today’s standards, which isn’t to say the game will run on any old machine, but they remain reasonable.

With the minimum requirements, you can expect to run the game at around 30 fps at a resolution of 720p, and the settings turned down to low. Although the game has yet to release, we’re confident Amazon will pack in a host of graphical settings, which may, through different permutations, offer better performance than cited above depending on the PC used to play the game.

Moving to the recommended requirements, they’ll net above 60 fps at 1080p with the settings maxed out in New World. Note that the CPU and GPU requirements (a GTX 970 really isn’t a big ask by any standard) aren’t excessive, but the 16 GB of RAM required do up the stakes somewhat, so keep this in mind if you hope to run New World on an older build.

Pushed for a recommendation on a system to run New World, we would suggest looking at our $600 build as a good entry point. We’ve kept the cost down without sacrificing performance through the choice of AMD components for the CPU and GPU.

The build features an AMD Ryzen 5 2600 processor, AMD Radeon RX 580, and 16 GB of 3200 MHz DDR4 RAM. If you line up the specifications side by side with the recommended requirements, you’ll see they exceed these quite comfortably.

In terms of real-world performance, you’re looking at comfortably over 60 fps at 1080p with the settings on ultra, or thereabouts. Note that as an always-online game, a steady broadband connection with a decent speed is a prerequisite to playing New World.

Unless you plan to play more demanding games, anything more is overkill at this point, but if you’re looking to future proof your build, we also recommend our $800 build. It jumps up a notch when it comes to performance and includes an AMD Ryzen 5 3600X CPU and GeForce GTX 1660. This one also suits those looking to run New World at 1440p without sacrificing frame rates.