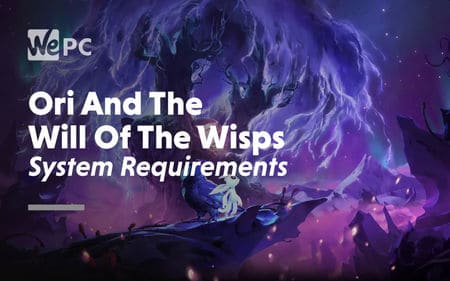 Can I Run Ori and the Will of the Wisps?

To figure out whether your PC can run Ori and the Will of the Wisps, you’ll initially need to know what components you have, playing close attention to the CPU, GPU, and RAM as these have the most significant impact on performance. Should you be unsure how to go about doing this, fret not as we’ve compiled an easy to follow the step-by-step guide, which you can find right here.

With your PC specifications in hand, compare them to the minimum and recommended requirements for Ori and the Will of the Wisps that we’ve listed further down. While the minimum will get the game running, we suggest aiming for the recommended requirements, if at all possible. The logic is that if you exceed them, you’re less likely to encounter performance issues when running the game.

Ori and the Will of the Wisps Game Details

Through progress and puzzle-solving, the player unlocks new abilities housed, this time, in a shard system. These grant access to closed-off areas in previously completed areas. It’s a pattern that will be all too familiar to fans of the Metroidvania genre and those acquainted with the original.

Like in the previous Ori title, players reprise the role of Ori, the guardian spirit, as he sets off on a journey of discovery to uncover his fate by venturing beyond the familiar locales of the forest of Nibel.

From the trailers released to date, Ori and the Will of the Wisps is set to follow in the same whimsical footsteps as the first entry in the series and offer players the chance to explore every corner of an expertly crafted atmospheric world.

Ori and the Will of the Wisps Predicted Minimum Requirements

Ori and the Will of the Wisps Predicted Recommended Requirements

We must stress that the above system requirements are informed predictions based on what we know about Ori and the Will of the Wisps and the performance of the first Ori game. As such, don’t take these as gospel, but more of a ballpark estimate in anticipation of Moon Studios publishing official system requirements. We’ll be sure to update this article when the news drops.

It’s immediately apparent that Ori and the Will of the Wisps isn’t expected to be all demanding despite slated to offer a veritable feast for the eyes in terms of graphics.

The RAM requirements are low, as is the 8 GB storage space requirement, which is a welcome change from the 50 GB to 100 GB of most modern titles. The CPU demands are a little high compared to the GPU, but nothing out of sorts for any gaming rig worthy of the name built or purchased in the last five years.

The minimum system requirements should net you 30 FPS with a resolution of 720p and the settings on low to medium. As for the recommended requirements, these up the performance to a welcome 60 FPS at 1080p with the settings pushed to high and even ultra.

Once again, these are predictions, but we expect Ori and the Will of the Wisps to offer an array of in-game graphical settings to tinker with to find a happy equilibrium between performance and graphical fidelity.

Ori and the Will of the Wisps is a game that will shine through its graphical beauty, and as such, we recommend opting for a build with a dedicated GPU to get the best out of the title.

We, therefore, recommend our $500 build as an ideal starting point for playing Ori and the Will of the Wisps. With its specifications, you’re looking at 1080p at 60 FPS or more. The build will more or less run the game to the maximum of its capabilities with room to spare.

As for specifics, the build includes an AMD Ryzen 5 2600 CPU, 8 GB Radeon RX 570 GPU, and 16 GB of 3200 MHz DDR4 RAM. As you can see, these components surpass the recommended system requirements by a considerable margin.

Our choice of AMD components serves two purposes. Firstly, it lowers the budget considerably in comparison to Intel and NVIDIA counterparts. Secondly, they offer excellent performance for the price. It’s a win-win.

On top of that, the build sets you in good stead for other modern games.