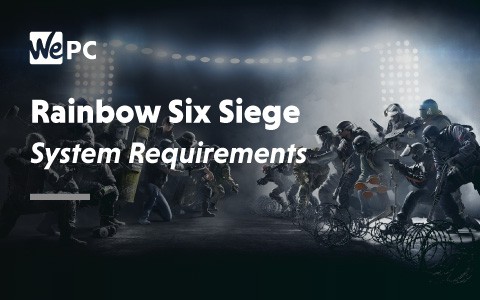 If you’re interested in playing Tom Clancy’s shooter game Rainbow Six: Siege, one of the first questions you should ask is: can I run it on my PC?

Before you head out and buy the game, we’ve put together the system requirements for you to take a look through and check before you spend your money.

Gameplay allows players to utilize different members of the Rainbow team who can access different weapons and gadgets, giving you a lot of variety in the gameplay.

The gameplay promises an action-packed series of missions in which you can fight over hostages, hunt people down, crash through ceilings, blow up lots of things and shoot down walls – everything you could ever want from a first-person shooter game.

With one of the most popular continuously updated multiplayer modes, Rainbow Six Siege promises heart-pumping, tactical action for 5v5 player action. Players take on the role of a unique operator in these matches. With each operator having a different playstyle and new operators being added frequently, you’ll find your time investment is going to be well worth it.

If you’re looking to pick up Rainbow Six Siege, checkout ENEBA for great prices on the Standard Edition, Gold Edition, and Deluxe Edition of the game.

With the action sometimes being frantic and unpredictable, you’ll want to keep a steady FPS throughout. If you do have the ability to invest in your hardware, it will definitely be worth it if you love playing this franchise.

As you can see from the specs above, this isn’t a game that requires a computer that will cost you a fortune. It’ll need something around the $500 mark, so if you’re interested in some budget to mid-range PCs, take a look at our recommendations.

However, investing in better hardware is never a bad thing. Any improvements to hardware are only going to improve your gaming experience and also open up the potential to run games with more demanding requirements. If your main aim is to run this title alone though, don’t go too overboard on parts as the content that Ubisoft keeps adding shouldn’t impact how well the game runs.