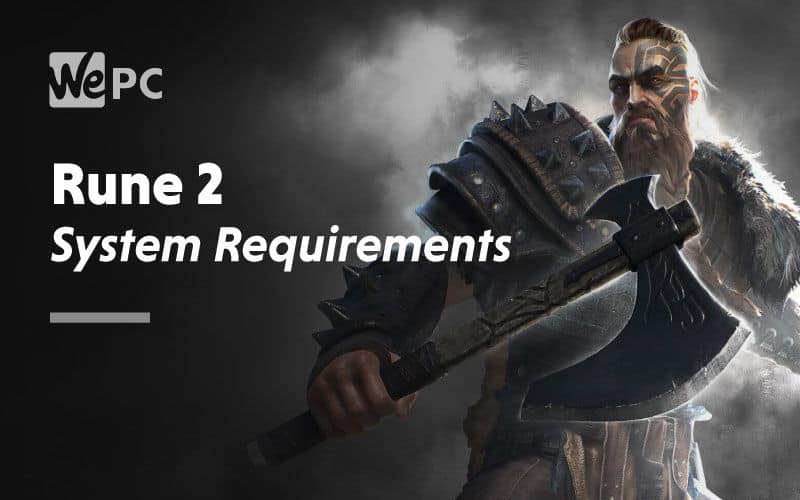 Are you ready to embark on an exciting new Norse adventure? If you are a fan of the original Rune game, Rune 2 is coming up for release in 2020. This sequel has been planned since way back in 2000, so it’s good to see it finally get a release.

If you are looking to start playing this title, you need to know whether you will be able to run it on your current PC. We will help you figure out whether PC can run it by giving you a rundown of the system requirements along with some recommendations on hardware and PC builds if you are looking for an upgrade.

First, you will need to check your computer specifications, which we have a handy guide put together to help you do that.

We are currently working on a tool that will make checking your PC’s specs and comparing them to game system requirements a lot easier. We will let you know more as we work on this and when a release date is decided on.

Rune 2 puts you back in the Nine Realms, which are under threat from the foretold Ragnarok – the end of the world. However, the world didn’t end. Instead, the Nine Realms has become overrun with beasts, giants, and the undead over the past seven years. The gods did not die, but Midgard is run by the god of chaos and mischief, Loki.

You play as a Viking warrior, and you get to choose to align yourself with one of the Norse gods. You will have to pillage villages and towns, on the hunt for armor and powerful weapons which will help you complete quests on behalf of your chosen deity.

In return for completing these quests, your deity will provide you with blessings in the form of increased strength and magical abilities. You will get to explore vast lands, fight terrifying beasts, and take in the sights of the Nine Realms.

There’s also the option to play with friends in an online co-op where you can team up with your Viking allies to complete quests and help each other out.

Looming over your quests is the knowledge that Loki plans to reset Ragnarok to keep Midgard in a state of an endless apocalypse. It’s up to you to save humanity from Ragnarok.

For an action title such as this, you will want a smooth gameplay experience. We would recommend aiming for a build that can provide consistent 60 FPS. This will ensure smooth gameplay when involved in action scenes and battles. The last thing you want is a jerky gaming experience when playing with friends.

This should be achievable with the recommended requirements, but it might be a bit of a push with the minimum. If you can only achieve the minimum requirements, you may need to dial some of the settings down to reduce lag or stuttering. You will still be able to play it, but if you want to experience this game at its finest, it might be time to bite the bullet and think about upgrading your system.

If you are ready for a PC upgrade, you can take a look at our guide on how to build a gaming PC. Upgrading your PC will not only help you run this title, but it will also make for a much better gaming experience when playing other games you might want to in the future.

We would recommend a PC build in the range of $700, which will be able to run 1080p resolution and should manage a steady 60 FPS to help you achieve a smooth gameplay experience when fighting your enemies in battle.

If you have the budget and want to play it safe, a build of $800 will get you an upgraded CPU and graphics card to power those more demanding games.