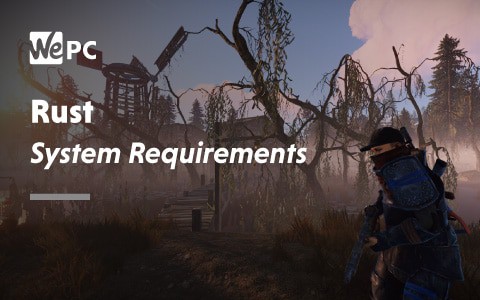 Do you want to try your hand at “one of the cruelest games on Steam” (as reviewed by PC Gamer)?

Rust is a highly-rated survival game developed by Facepunch Studios. If you’re looking to run this game, you’ll need to know whether your system is up to scratch. We’ll show you the minimum and recommended requirements below so you can check before purchasing the game.

Rust has only one objective – to survive. To survive, you will need to overcome all the struggles you expect such as thirst and hunger, while also protecting yourself from other players. You will need to build shelters from the cold, kill animals for meat and if you want to go further you’ll have to create alliances with other players and even form bases together.

It’s a multiplayer game in an open world full of threats such as wolves and bears, but the main danger is other players. Battle it out with other players using craftable guns, bows, melee weapons, and projectiles.

You will start out from the beginning though, with a rock and torch which you can use to cut down trees and break stones apart. Fans of Minecraft will appreciate this part of the game. It is survivalist at its core, but once you master that aspect you will be building forts in no time.

This game was originally a clone of the popular zombie survival game DayZ, so if you are a fan of that, you will likely enjoy this title too.

The better your system, the better your game will perform. In fact, if you have a CPU that’s anything less than an Intel Core i7-4690K or a Ryzen 5 1600, you will likely need to turn down some of your settings to play Rust well on your PC.

We would also recommend you install a game like Rust on a Solid State Drive as this will improve load times. In this game, these are likely to be higher than other games you typically play.

The system requirements are higher than many games in terms of CPU and a huge 16 GB of RAM so we would recommend taking a look at upgrading your current set up or you’ll struggle to play the game as well as you’d like.