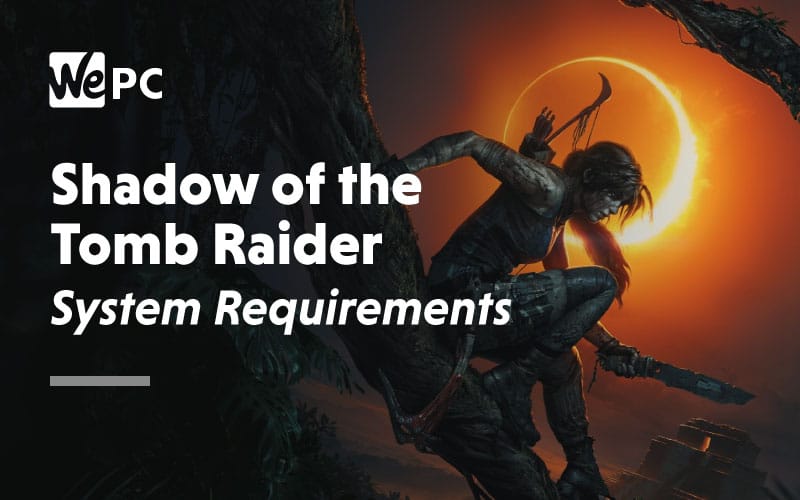 Can I Run Shadow of the Tomb Raider?

If you’re looking to start playing Shadow of the Tomb Raider on PC, a vital step you need to take (ideally before purchasing the game) is to check whether your PC can run it.

It’s so frustrating to purchase a game, get your hopes up and when it actually comes to playing the game, you realize that your system can’t handle it. A simple way to check whether your PC specs are up to scratch is to follow our quick guide and then compare them to the below system requirements.

For those looking to save some time doing this with other games, we’ve got good news on the horizon. We’re currently developing a tool that will automatically check whether you can run a game on your current PC setup. We will let you know more one the development as this progresses.

She journeys to the legendary city of Paititi, where she battles Trinity, a paramilitary organization while also working to stop a Mayan apocalypse. The Mayan apocalypse threatens to start a permanent solar eclipse, something that is foretold on temple murals that Lara discovers while searching for the Dagger of Chak Chel.

Gameplay consists of combating enemies with firearms, using stealth to explore and raid tombs to unlock new rewards, as well as completing side missions and scavenging resources to craft tools.

New to the series is a barter system, which allows players to trade and sell resources. There are some other changes to the Tomb Raider gameplay, including controls for swimming and climbing. The game also places greater emphasis on stealth. In this title, Lara can escape her enemies’ line of sight by using mud to camouflage herself or hiding in bushes or other vegetation.

With the above system requirements, you won’t need a supercomputer to run this title. It’s still a fairly accessible game that most PCs will be able to run. However, game performance will naturally drop in quality if you only opt for the minimum requirements.

The minimum requirements for this game won’t make for the best gaming experience, you’ll achieve only an average FPS of 20-40 on low to medium settings. We’d highly recommend investing in the recommended requirements if possible.

In order to play this game the way it was intended, in other words at 1080p with 60FPS, you will need at least an Intel Core i7 4770K 3.4GHz. This will achieve graphical settings of around medium-high.

For the recommended requirements, if you only just hit them, you may need to turn down some of the graphics settings for the game to run comfortably without dropping too many frames.

Based on the system requirements listed above, we recommend a mid-range computer at around the $700 range of build. This will ensure you achieve stable gameplay at a resolution of 1080p while still keeping a consistent 60FPS rate.

This build should be more than enough to ensure that performance is consistent and smooth enough to enjoy the gameplay. It will also allow your system to comfortably play other titles with similar system requirements and more than Shadow of the Tomb Raider.