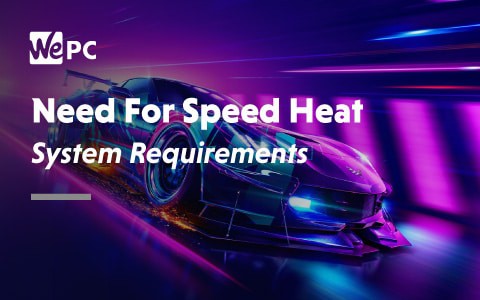 Can I Run Need For Speed Heat?

Unsure if your PC can handle the high octane racing of Need For Speed Heat? Fret not; we’re here to help.

First, you’ll need to figure out your gaming PC’s specifications, especially the GPU, CPU, and RAM, as these will have the most significant say in whether your machine is up to the task. If you need a helping hand compiling all your hardware components, check out our step-by-step guide right here.

From there, scroll down to the minimum and recommended system requirements below and compare these to your build. If they match, then you’re in luck. If you not, you may want to seriously consider upgrading one or two components to ensure Need For Speed Heat has enough power to run.

To make the process easier for our readers, we’re hard at work putting the finishing touches on a bespoke utility designed to automatically scan a PC and return a full list of its components. It’s still under wraps as of writing, but we’ll be sure to publish an update once it’s up and running.

Need For Speed Heat is the latest entry in the acclaimed and long-running Need For Speed franchise. This time around, the game commemorates the twenty-fifth anniversary of the series by catapulting players to the glitz and glamor of a fictionalized take on modern-day Miami.

The city is called Palm City and includes an urban sprawl, countryside, and mountainous environs to speed through. Players can race during the day in sanctioned races snatching up all manner of cash prizes to upgrade their cars. At night, things go a little more underground with a vibrant illegal street racing scene coming to life under the city’s neon lights, where players earn reputation points rather than cash. With more reputation, comes a more sustained and skilled police response to your nightly drag racing antics from a rogue team of sketchy cops. Car chases form a big part of the night shift, and players must do their very best to get home safely before being caught by the cops or smashing their vehicle to bits.

While much of the game is about arcade-style pick-up racing, Need For Speed Heat includes a single-player campaign that explores the blurred lines of the law. The game consists of over 33 different car brands and nearly 130 individual motors to race and upgrade.

Without official minimum and recommended specification from Ghost Games and EA, we can’t make any worthwhile suggestions on what’s required to run Need For Speed Heat. The above are informed estimates, so don’t take them as gospel. Venturing a guess, we’d expect the game requirements to range around the medium to possibly high mark, with an emphasis on a decent GPU.

Fortunately, Need For Speed Heat went gold on October 9th, so the official requirements should surface before long.

Looking a little further ahead, Need For Speed Heat’s release is less than a month away, meaning performance reviews should be coming in thick and fast before long. At which point, we should get a much better idea of what Need For Speed Heat needs on the user end to offer the best experience.

Based on the predicted requirements married to a spot of speculation, we recommend the following PC build if you are hoping for ultra settings at a resolution above 1080p with a consistent FPS count above 60 FPS.

If you need a starting point to move forward from, we point you in the direction of our $800 build, which offers excellent power for the price that should set you in good stead for most modern titles, including Need For Speed Heat.