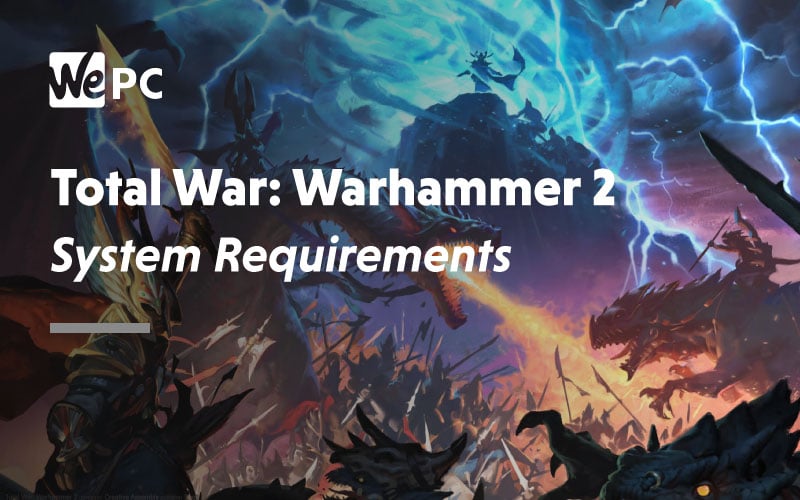 Can I Run Total War: Warhammer 2?

When buying a new game for your system, one of the most important things to consider is if you can actually run it. Turn-based strategy games such as Total War: Warhammer 2 can often surprise you with the number of resources they need. With varying amounts of units on screen, things can slow to a crawl quickly.

Sometimes, it can be a bit tricky when trying to work out if your system can run a title, often people may just make the purchase and then worry later. To avoid disappointment, simply take a look at the following article to find your PC specs, then use these to compare against the minimum and recommended requirements below to get an idea of where your system falls. We’re currently working on a tool that will check this for you automatically.

You may find that you can run the game, but only on the minimum requirements. This will likely lead to an unpleasant gaming experience that will have you wanting to upgrade in no time.

Set in the Games Workshop’s Warhammer universe, this release allows players to take a greater role in the conflicts. This title features the same level of monster-crashing mayhem seen in its predecessor, with players taking the reins using turn-based strategy and real-time tactics to forge their way to victory.

Players will have the chance to see the many theatres of war expanding over the five continents found in the game– Ulthuan, Naggaroth, The Southlands, Lustria, and Nehekhara. As with previous Total War titles, players will act as the General during real-time battles, coordinating their troops and forming strategies to achieve victory.

Players can also take on other players in the expansive multiplayer mode. This includes some cross-compatibility from the first title with players able to use any faction that they own from the previous game along with its DLCs. Players can also engage in battle with other factions, even if they don’t own them.

It’s always nice when there is information already available on what each band of requirements can achieve when it comes to gameplay. If your system only just matches the minimum requirements, don’t worry, there are lots of settings that you can tinker with within the options that could allow you to achieve acceptable results. If you value your sanity though, we highly recommend meeting the recommended requirements or above.

The recommended requirements will allow you to achieve around 45-55 FPS on a campaign map in a 1v1, 20 units vs 20 units battle. This should be possible with graphic settings on high, running at 1080p.

The additional requirements for 60+FPS will, of course, allow you to reach a consistent 60FPS at a resolution of 1080p. As with the recommended settings, this will be in a 1v1 battle, containing 20 units vs 20 units. However, you will be able to push the graphical settings to ultra with this build.

Based on the game type, we’d recommend meeting the recommended settings at the very least. If you have the budget, then pushing on towards the 60+FPS settings will net you great results. Also, if your framerate starts to chug during more intense battles, you’ll be able to knock the graphics settings down from ultra to high to claw back some frames.

If you simply need to upgrade a couple of components to achieve this, the ones listed below would make a great addition to a build.

If you are building from scratch and are looking for a good base to start from, we’d point you towards our $800 build. This contains a great set of components that will keep you running for years to come, handling the majority of new releases along the way.