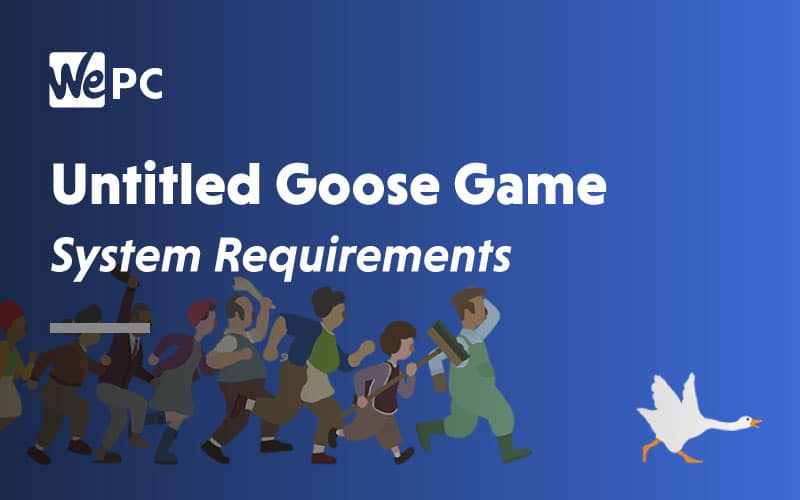 Can I Run Untitled Goose Game?

Whether you can run Untitled Goose Game is dependent on what gaming rig you have and, more specifically, its constituent parts, notably the CPU, GPU, and RAM. As a first step, you’ll need to determine what these are. If you need a helping hand doing this, you can refer to our guide right here.

WePC is currently developing a tool to make the whole process of checking system requirements a lot more straightforward. It will scan any given PC and produce an extensive list of all its components for easy reference. It’s still in development, but we’ll make sure to announce it once we’ve applied the finishing touches, and it’s ready for our readers to use.

Untitled Goose Game is a stealth puzzle game developed by Australian indie studio House House, which, as the name suggests, involves a mischievous goose intent on making the lives of the inhabitants of a quaint British village as difficult as possible.

As the eponymous goose, players must traverse various sandbox environments within the village to complete objectives, solve puzzles, and generally cause a nuisance. These include gathering certain objects, pranking and pushing NPCs into specific situations, and honking a whole lot to unlock the next area. The overarching aim of the game is to steal a bell from a miniature rendition of the village and bring it back to the goose’s den.

While the premise is simple, Untitled Goose Game is packed with slapstick humor and light-hearted antics. It has skyrocketed to international fame, notably as a popular meme, thanks to the unique angle of playing a troublesome goose, even earning a nomination for the famed The Game Awards, which is no small feat.

Untitled Goose Game has among the lowest system requirements of any game released in 2019, and as such, virtually any PC will be equipped to handle it. The graphics are simple, yet charming and don’t need much to get the best out of them.

Any old PC, even one not explicitly labeled as a gaming rig, will handle the game just fine. The game isn’t defined by action-packed sequences where high frame counts are crucial to gameplay. Untitled Goose Game is very forgiving, even on low-end machines.

The minimum requirements will net a stable 30 FPS at 720p, while the recommended requirements will push the FPS to 60 with a resolution of 1080p. The AMD Radeon R7 360X / NVIDIA GeForce GTX 750 Ti demand is even a stretch in our opinion, and any old integrated GPU should suffice for any PC from the last five years or so.

We recommend our $300 build as a strong foundation. It will run Untitled Goose Game without any performance issues to the maximum of its graphical capabilities.

It isn’t the best PC on the market by any stretch of the imagination but provides more than ample power to run a selection of great indie games of the ilk of Untitled Goose Game. And, all this within a very affordable budget range.