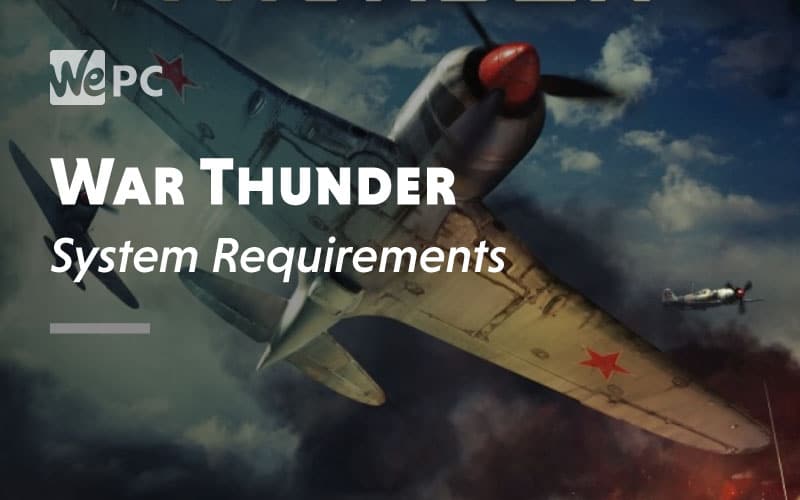 Can I Run War Thunder?

If you are looking to get stuck into the action and delve into the world of military tactics and vehicular combat, then you might be considering playing War Thunder.

However, before you install this game, it’s always worth a quick check to see whether or not your current PC can run the game. While this is a free to play title and there’s little risk if you decide to install it, checking the system requirements and your PC specs could save you a lot of time and hassle.

We will show you the minimum and recommended system requirements for War Thunder, but first, you’ll need to check your PC specs. If you need help on finding your specifications, we have a handy step by step guide for you to go through.

Once you have your PC specifications on hand, all you’ll need to do is compare them to the system requirements below. In the future, we’re aiming to make this whole process easier with a tool we have been developing. This tool will automatically check your PC specifications and match them against the system requirements for whatever game you’re wanting to play. We will let you know the closer we are to completing development on this.

For now, keep reading for the system requirements and also some hardware suggestions if you decide it’s finally time to upgrade your gaming PC.

War Thunder is a free to play MMO game that allows you to control aircraft, armored vehicles and naval craft from World War II, the Cold War, Spanish Civil War, and the Iraq War. It’s the perfect game for history fans who love MMOs and action titles.

You can join thousands of other players around the world to take part in huge battles in the air, on land or at sea. There are over 1,000 vehicles and combat options to choose from, with regular content updates to add new vehicles, maps, missions, and even nations.

There are multiple different battle options including arcade battles, realistic battles, and simulator battles to choose from which gives you lots of gameplay variety, depending on what you feel like playing.

Another great thing about War Thunder is that it allows for cross-platform gameplay. You can seamlessly switch between Windows, Mac, PlayStation 4 and Xbox One.

With intense, fast-paced missions and battles to consider, it’s best to have a PC that can keep up and deliver solid frame rates. The last thing you want to experience is lag or stuttering when in the heat of battle.

With that in mind, we would definitely recommend trying to hit the recommended requirements at least, if not better. While this isn’t a particularly demanding game when compared to other battle games, you will still want to aim for a PC that can run everything smoothly.

Meeting the recommended settings for this game should easily allow you to play on the highest settings with a framerate of around 60FPS on your system.

The system requirements listed above won’t require you to fork out a fortune for a new gaming PC build. However, if you are looking at upgrading your PC to play War Thunder or similar games, we would recommend going for a mid-range PC in the area of $700.

This type of build should be more than enough to run War Thunder with the performance level that you need for a game like this. You should be able to hit a solid 60 FPS and run it with 1080p resolution with no issue.

For an idea of what a $700 PC build will consist of, some of our $700 build components are listed below.

This PC build gives you the flexibility to play most other games in this genre well enough. Of course, if you’re looking to also play more demanding titles or you want to invest in your gaming PC’s future, then you might want to take a look at our recommendations for an $800 PC build for inspiration.