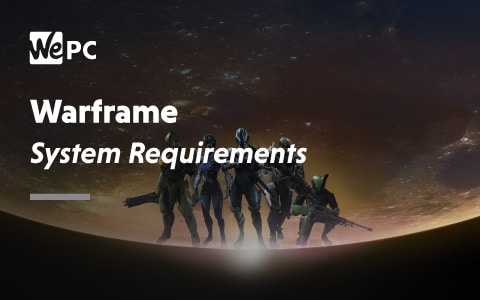 Can I Run Warframe?

First things first, you need to check what components make up your gaming rig. Check out our guide here if you are unsure how to go about doing this.

From there, you can compare the results against the minimum specifications we’ve listed below to see whether they fall in line with what’s required to get Warframe up and running.

For those that need a helping hand to determine system specifications, fret not as we’ve got a helpful new utility in the works. Once launched, it will automatically scan your machine for its hardware and provide a breakdown of the components. It’s still cooking away in the great WePC forge, but we’ll provide an update once it’s fine-tuned and ready for action.

Following a cryogenically-induced slumber of a few centuries, a species of ancient warriors known as the Tenno awake to discover their home solar system is plagued by a vicious conflict between warring factions. Among them are the splintered remnants of the Orokin Empire; the Corpus, the Infested, the Sentients, and the Grineer, each with their own lore and weaponry from self-replicating machines to a mega-corporation by way of militarized clones.

In Warframe, players take on the role of a Tenno, and through missions, combat, parkour, and various role-playing scenarios developer their character by acquiring improved weaponry and upgrading their eponymous Warframe, a bio-mechanical armored bodysuit endowed with various combat-oriented abilities. The player’s ship is a hub of sorts to manage weapons, mods, and equipment, crafting, and so on before jumping into battle

Missions vary from story-based excursions that, through progress, grant access to locations further afield to community challenges and short-lived quests aligned to Warframe’s persistent universe. Successful missions grant experience, loot, and in-game currency to spend at the Warframe store. If that isn’t enough, players can test their worth against other players in Warframe’s Conclave mode PvP matches.

Warframe has come a long way from its humble beginnings as one of the first titles to fully embrace the free-to-play model, and now boasts a player base of near enough 50 million players this year alone. A steady flow of regular updates and content drops from developer Digital Extremes keep it fresh and exciting.

In what is a departure from usual etiquette, developer Digital Extremes had only provided minimum requirements for Warframe.

By virtue of its age – nearing seven years at this point – Warframe is pretty forgiving when it comes to the minimum setup required to get the game going. That said, the minimum specifications don’t seem to have been updated in line with the slew of major updates Digital Extremes has pushed out and are off the mark somewhat.

You can run Warframe on those specs, but it won’t be approaching anything resembling an enjoyable experience. We’re talking sub 20 FPS at the best of times, and the settings toned down considerably, not to speak of a low resolution to match.

With the absence of recommended specifications from the source. Here’s our take on what you need as a minimum to enjoy Warframe:

With this setup, you can average a good 50 to 60 FPS depending on how you tweak the settings and resolution, but you won’t be approaching ultra settings by any stretch of the imagination. The CPU isn’t so much a source of trouble as the GPU, so if you can upgrade the graphics card, it’s a good move.

If you want to experience Warframe with as little lag as possible and in all its graphical glory, then here’s what we recommend for a stable 1080p, max settings, and FPS above 60.

Either our $500 or $600 builds are a good foundation to build upon. Check those out if you want a push in the right direction. GPU-wise, any of AMD’s most recent budget units with a least 6 GB o are more than enough for Warframe. We recommend considering these if you are building or upgrading on a budget.