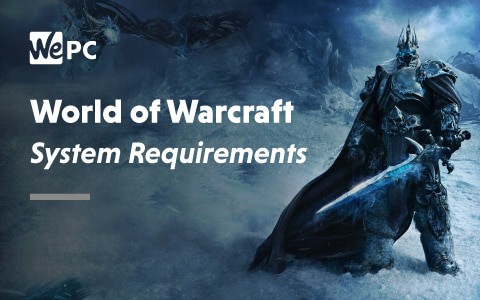 Will I be able to run World of Warcraft?

If you’re thinking about jumping into the world of Azeroth to experience the game you’ve no doubt heard a LOT about, then there is no better time than now. The first thing that comes to mind is simply the question of if you can run it or not?

Even if the answer is, technically, yes, you want to make sure that you can run it smoothly, on settings where it looks good but still delivers a stable FPS. You won’t have much enjoyment watching your quests go by in a slideshow!

We’ll give you a general idea on what your system will face when running this title for the first time. We’ll also list both the minimum and recommended specifications for easy reference as well as some suggestions on hardware that come to mind

World of Warcraft has come an awful long way since it was released back in 2004, so much so that Blizzard is now letting players embark on a new adventure…back in the world of Azeroth as it was on release! It really says a lot about the staying power of a game when the player base is still around almost 15 years later to want to go back in time to experience the old days again

With a mix of questing, dungeons, and PvP, World of Warcraft quickly became one of the best-selling MMORPGs on the market. After selecting a realm to play on, players have the ability to create a character. This is a permanent choice that will shape the players experience for hundreds of hours to come.

Further customization comes in the class section. Depending on which race the player chose they will have an option of classes to pick – these greatly affect playstyle throughout the game. Classes such as hunters, mages, monks, paladins, rogues, and warriors typically fall into typical roles, commonly known as DPS, Tank, and Healer.

Once through all this, players are free to explore however they wish. A large amount of time will be spent learning about the lore and questing in order to increase your character’s level, finding loot along the way. Other encounters are available such as dungeons that promote group play in order to successfully conquer them.

If you want to have a good time then it goes without saying that you should be at least aiming for the recommended specifications, if you meet these then you will be left with the experience that Blizzard set out to achieve. Sure, you might run into some bugs here and there but at least the game will look great when you find them!

We recommend aiming a bit higher than the recommended if you can. Anything above this will allow for the game to run and look even better. Although these recommendations aren’t particularly taxing these days, if you don’t have some of the pieces of the puzzle then feel free to lower some of the settings to get a stable FPS, after all, this will have the biggest impact on gameplay.

Even though this isn’t the hardest game to get running these days, some systems may still struggle. If you are looking to run this game but are still a couple of pieces short then we recommend looking at our mid-range build guide. These components (or similar ones in their categories) should be more than enough to get this game running smoothly.

If you are looking to push the game to the max you (luckily) won’t need a supercomputer to do it. Most mid-range builds, especially those bordering on high-end will achieve great results. If you have a bit of extra cash to spend and are looking for recommendations then take a quick look at one of our sub $1000 build guides.