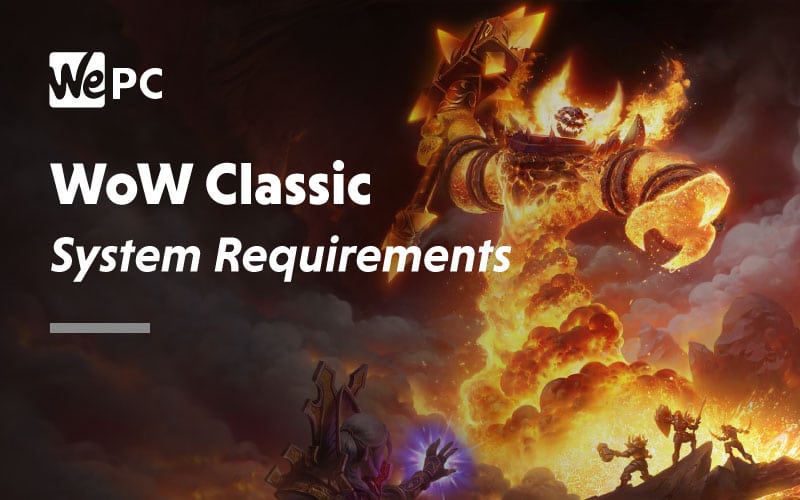 Can I Run World of Warcraft Classic?

To determine whether your gaming PC can handle the demands of Blizzard’s World of Warcraft Classic, you’ll first need to know its specifications. From there, you can check these against the minimum and recommended specifications listed below. If your components match or are better, then you should be good to go.

If you need a helping hand in establishing your PC’s specifications, we’ve got an easy-to-follow guide available right here. Moving forward, we’re working hard on a new tool to automatically analyze machines and determine their exact specifications to make the process a whole lot easier. More news on that in the coming weeks and months.

Transporting hordes of nostalgic players back to 2004, World of Warcraft Classic offers players a faithful replica of the vanilla version of the game, warts and all, that took the world by storm over a decade ago and defines the MMORPG genre to this very day. That means no expansions, and none of the quality of life improvements beyond those introduced in 2006 with patch 1.12.1, but all of the combat mechanics, model assets, map layouts, and talent trees of the time remain.

The eight-player classes return, namely Orcs, Tauren, Forsaken, and Trolls on the Horde side, and Gnomes, Humans, Dwarves, and Night Elves on the side of the Alliance. Leveling is capped at 60 and grinding forms a central part of the experience, promoting cooperation and player interaction, the very factors that led to huge communities and guilds of like-minded gamers that many look back on so fondly.

It’s a trip down memory lane that banks on authenticity and one that anyone who was involved all those years ago won’t want to miss.

By today’s standard, World of Warcraft is anything but a demanding game and although it’s benefited from a minor facelift it runs in very much the same way as it did back in the mid-2000s. The minimum specifications mean it should run comfortably on any run-of-the-mill laptop with integrated graphics at anywhere between 30 and 60 FPS. The 5 GB space requirement harks back to a simpler time in gaming when games didn’t tally up to multiple dozens of GB.

As for the recommended specifications, they require better components but remain entirely reasonable and a threshold the overwhelming majority of PC owners should meet with ample room to spare. Expect 60 FPS or more at the ultra settings introduced in Classic that were absent from the original – detailed environments and shadows, and better-rendered fauna and flora.

It’s very rare to say this, but pretty much any PC that isn’t a complete office potato should be fine to run World of Warcraft Classic reasonably enough to have a good time. Our $500 PC build with the following specifications will be more than enough;

If you want to really push those 15-year old graphics to 4K at over 60 FPS, then you’ll need something more substantial to do so. We recommend;