Both the Ryzen 7 3700X and the Ryzen 7 3800X AMD CPUs were released on July 7th, 2019. They are popular choices within the gaming community. It is easy to see why considering AMD has upped its CPU game drastically over the last few years.

With both of these CPUs being released on the same day with similar specifications, if you are set on the brand AMD, the question is which one should you choose?

In today’s article, we will be taking a closer look at the Ryzen 7 3700X and the Ryzen 7 3800X and putting them head to head. We will compare their cores, boost clocks, and base clocks to give you a better idea of which one would be the best option.

We will also be looking at the overall price of both and deciding whether either live up to the popularity and hype that surrounds them. For us, it is more of a case of which one you should choose, rather than if you should choose any at all!

Before we get into the finer details of each CPU, we have compiled a table of specifications for both the 3700X and the 3800X for you to take a look at. 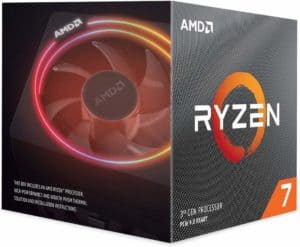 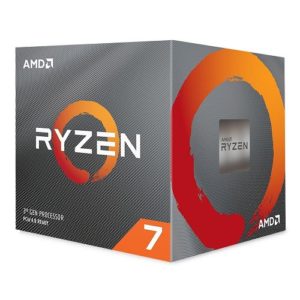 Equal gaming performance to the 9700k

105W TDP means heat could be problematic under insufficient cooling

For the keen gamers, you will have noticed that there are ever so slight differences in the base and boost clock. In addition to this, there is a difference in the TDP. We will be discussing these three key differences as we get further into the article.

On paper, it looks as though the Ryzen 7 3800X is a slightly better CPU in comparison to the Ryzen 7 3700X. However, there is more to a CPU and how it runs than just the specifications, so we will not decide which one is better just yet.

In these sections, we will be going into greater detail about the components and features of both the 3700X and the 3800X. We will be comparing them to see which one is better.

If the cache of the CPU that you choose is not high enough, your PC may have issues with loading games and files. A cache that is too low can have more of a significant impact on your gaming experience than you may realize.

If we take a look at these CPUs, they both have the same L1, L2, and L3 cache, so in this aspect, it does not matter which one you decide to choose.

Although the cache is the same, is it good enough for gaming?

Well, this is something to consider. The cache for both of these CPUs is great for gaming. While they may not be the best on the market, they are both substantial and work well.

PCI Express 4.0 is something to consider when looking for a CPU for gaming, but it is not the most important factor.

PCI Express 4.0 will improve your overall gaming experience in comparison to PCI Express 3.0. It will improve the loading times of your game. While it is not a huge difference, it will have a positive impact overall.

If you have to choose between the 4.0 or the 3.0, we would recommend the former. It can also improve your overall bandwidth too.

The heat output and power consumption of a CPU is something you should take into consideration before purchasing. When CPUs are running, they will naturally generate a significant amount of heat, especially when gaming.

Given this, you must have a sufficient cooling system to stop the CPU from overheating. Both the 3700X and the 3800X have a Wraith Prism Cooler. The cooler works effectively.

The power consumption of these CPUs is slightly different. Here are the specifications for each:

From looking at the two models, you can see that the 3800X does have significantly higher power consumption in comparison to the 3700X.

The chipset for both CPUs is backward compatible. This means that if you do not want to upgrade your motherboard, you do not have to. These CPUs are compatible with an AM4 motherboard.

With the specifications aside, the next thing to consider is the CPUs performance. In this next section of the article, we will be discussing the overall performance of each CPU. We will be taking into consideration things such as the base and boost clock of each processor.

Base and Boost Clock Speed

The base and boost clock speed is one of the most important things you should consider when looking at a processor. AMD have excelled themselves with the speeds on both of the CPUs.

While there are several different clock speeds to consider, the ones you should focus on are the base and boost clock, the better the specifications are for these, the better your overall gaming experience will be.

Let’s take a look at the specifications for each processor:

So far, both the 3700X and the 3800X have seemed to be quite similar in their specifications. When you compare the base and boost clocks, this is where they differ the most.

The number of cores a processor has is another important factor to consider when it comes to gaming.

The higher the number of cores, the better your CPU will be at multitasking. While this is not necessarily essential when gaming if your CPU does not have enough cores, your game may struggle to load.

The threads are closely linked to the cores in a CPU. But, whereas the cores and physical, the threads are virtual. They are responsible for helping your CPU to multitask. They are an important element and will stop your processor from being put under too much strain while in use.

You will still have a good gaming experience and you will be able to run multiple tasks at one time without your PC slowing.

If you decide that your PC is not running as quickly as it should and you want to increase it, you can do so via overclocking. Not all processors allow you to overclock. If they do not, replacing them to upgrade is no cheap task.

Thankfully, the 3700X and the 3800X both allow you to overclock. While caution should be taken when overclocking, it can be done with these CPUs.

It is worth taking into consideration that the 3800X may be better to overclock overall in comparison to the 3700X due to its slightly more efficient specifications.

Overall, there should not be too much of a difference in your overall gaming experience with these CPUs. They are both very similar in their specifications.

However, if you are looking to take gaming more seriously, the Ryzen 7 3800X may be the better option for you. You will likely notice slight improvements. Although it is not drastically different, the 3800X will perform slightly better overall.

Both the 3700X and the 3800X are great options for gaming and would be more than enough to get you started with your gaming journey. If you are looking to upgrade your old CPU to a fairly inexpensive one, we would recommend them.

The availability for both the 3700X and the 3800X is good. They are readily available to purchase on many sites and in stores. As they are a little over a year old, they are still some of the best CPUs that are currently on the market. Given this, they should not become unavailable any time soon.

These CPUs are both still being manufactured and remain ever-popular within the gaming community.

In terms of the cost, this is where one of the main differences between the two AMD Ryzen models lies. As is to be expected, the 3700X is less expensive in comparison to the 3800X. However, its overall specifications are lower.

When you are looking at both models, you will need to weigh up whether or not you think the increased price is justified in the 3800X. While it does have a better specification, it is not vastly different.

If you are a beginner and are on more of a budget, we recommend purchasing the 3700X. It runs well and contains everything you will need to get your gaming PC started.

However, if you are a more seasoned gamer, you will likely notice the difference the increased specifications will have on your overall gaming experience. Given this, the 3800X is likely the better option for you.

The pricing of both is not hugely different and is under $100. In the grand scheme of CPU pricing, this is minimal. Given this, we would recommend splurging that extra bit of cash to upgrade to the 3800X if your budget allows for this. If you would like to purchase either of these two CPUs, you can do so via Amazon US here:

To conclude, both the Ryzen 7 3700X and the Ryzen 7 3800X are impressive CPUs. AMD is excelling with their newer processors and it is easy to see the work that has been put into making the specifications better.

While the 3800X will perform slightly better overall due to its base and boost clock being higher, these are small differences. While you may be able to notice the differences, they are not too dissimilar.

If you have the extra money to splurge, we would recommend purchasing the 3800X, however, at a cheaper price the 3700X is still a great option. They both have all of the required specifications needed to game without issues and are both still fairly new CPU models. 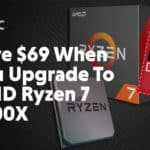 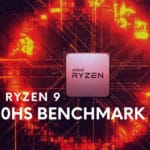 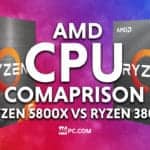 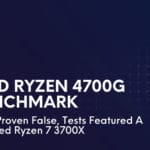