Ebuyer will be slashing prices on everything from components and gaming PCs, to TVs and speakers this Black Friday, lets take a closer look at the best deals. 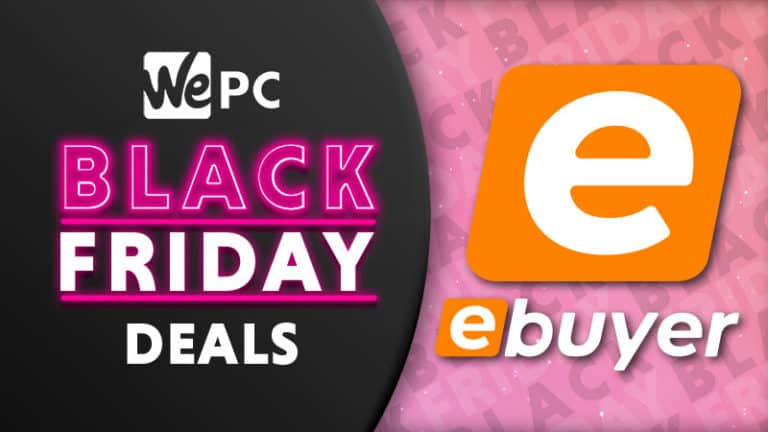 Ebuyer is one of the UK’s leading online electrical retailers, offering anything from Televisions and computers to gaming consoles and audio equipment. Ebuyer has always been a go-to retailer for PC components, with the company’s roots deep in the PC realm.

Our picks for the best Ebuyer Black Friday deals 2021

Ebuyer is one of the better places to pick up a bargain during the Black Friday discount season, with a wide product range covering the whole spectrum of technology and PC gaming. They are a particularly good option if you’re looking for gaming monitors or RAM kits, they also stock a lot of refurbished peripherals, so if you don’t mind picking up something that’s technically second hand this Black Friday, you can stack the discounts for a really rather impressive bargain. We’ve detailed our favorite picks below for your convenience.

AS mentioned earlier Ebuyer is an excellent place to go for RAM deals, and this Black Friday the story is no different, we’ve found an excellent £31.99 off on the Patriot Viper 4 16GB DDR4 RAM kit. The kit comes with 2x8GB modules clocked at 3200MHz and features Intel XMP profile support so you can truly get the best performance out of DDR4. DDR5 might be on the horizon but DDR4 is still a strong contender and the prices are going to continue to fall as DDR5 releases continue to come through. If you’re hungry for more RAM deals, here’s some more:

Gaming monitors are one of the better ways of increasing your performance with their increased refresh rates and decreased response times. If you’ve been looking for such an upgrade you are in luck as the AOC C32G2ZE 31.5″ 240Hz curved gaming monitor is available now with a generous £65.01 discount. stocks on such a monitor are unlikely to last so get it while it’s hot! (and actually available). Other gaming monitor deals are as follows:

Want to avoid the hassle? just get a new beastly gaming rig ASAP? Ebuyer has a pretty good range of pre-builds featuring some of the latest and greatest technology out there. For example, the AlphaSync Diamond RTX, with a 3060Ti and AMD Ryzen 7 CPU. This is currently going with a huge £250 discount. It’s also got a 500GB SSD and a slew of RGB fans so everyone in your house will know that you’re a pro gamer this Black Friday. Other Pre-Built gaming PCs can be found below –

What are going to be the best Ebuyer deals this Black Friday?

Ebuyer frequently feature deals across the year, however, none are as lucrative as the Black Friday savings. As Ebuyer mostly sell electronics, such as laptops, TVs, monitors, and PCs, the prices are often fairly high but that means when the sales festivities arrive, we get treated to some special deals.

We usually see the best Black Friday deals on selected TVs. 4K smart TVs are almost definitely going to feature in this year’s sales, ranging in sizes for a variety of needs and budgets.

We will also see a lot of discounts on selected speakers, soundbars, and other audio equipment to support your shiny new TV purchase.

Gaming PCs, PC components, and laptops always get featured deals and from what we have seen from other retailers, it won’t just be older spec models. We have already seen some Black Friday deals on gaming PCs/ laptops with the latest hardware, so keep your eyes peeled on the day.

What are the best Ebuyer TV deals this Black Friday?

Ebuyer has a huge catalog of TVs to suit everyone but we are specifically looking at 4K smart TVs this Black Friday as we think they are going to feature the greatest deals come the day.

Ebuyer sells TVs from a mixture of well-known brands such as Samsung and LG but there are a few more affordable brands in there too. When buying a 4K smart TV from Ebuyer, look for stand-out features such as HDR and VESA compatibility, along with other nice-to-haves such as voice assistance and app integration.

What to look for with Ebuyer laptop Black Friday deals

Ebuyer stocks a large variety of laptops. You can grab yourself a Chromebook, 2-in-1, everyday laptop, or a gaming model, they have them all. We think the laptop deals this year will beat the previous hands down, even models that feature the latest hardware could be on the end of some large discounts. Look out for 11th gen Intel processors, AMD 5000-series processors, and RTX 30-series graphics cards if you are on the hunt for a premium deal.

What are the best Ebuyer gaming deals this Black Friday?

Ebuyer sells a range of gaming desktops, laptops, peripherals, components, and consoles and you can bet there are going to be a number of deals in every category. We are unsure whether new-gen consoles will get a deal but we could see some discounts on bundles.

We may see selected deals on gaming desktop PCs this year and while the best deals are usually reserved for the models with older generation parts, we could see a few high-end deals this time around.

PC component deals are a bit up in the air with stock limitations, however, you can always count on storage getting a discount. We may see 11th-gen Intel CPUs get a discount with the latest 12th-gen set to launch soon.

If you are planning on building yourself a new gaming PC or maybe even a sneaky upgrade, Ebuyer could be a great place to start. The stock has been a bit of an issue with graphics cards but if you can get hold of your other components for less, you’re doing OK.

If you are into gaming, don’t forget Ebuyer sells a lot of gaming accessories and peripherals. So if you do end up picking up a new laptop or gaming PC, it may be worth searching for a new mouse, keyboard, or even gaming monitor.