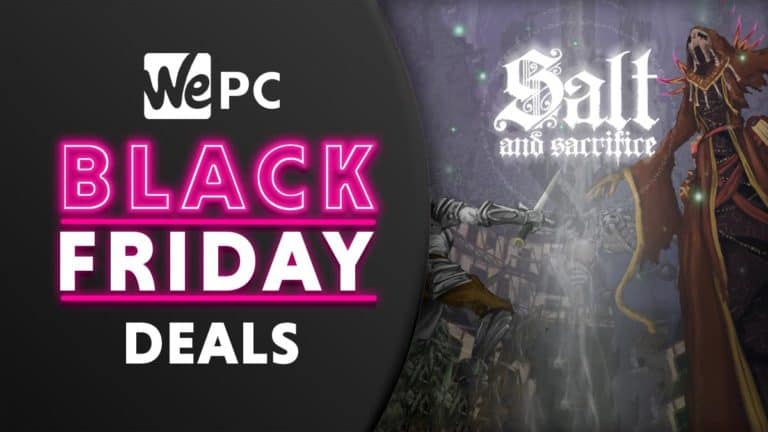 Salt and Sacrifice will make its Black Friday debut this year!

It is another game from the series, with the first being Salt and Sanctuary.

Salt and Sacrifice is a hugely atmospheric game, with a beautiful art style.

Salt and Sacrifice was released on May 10, 2022. That means it is the first time the game will be present for Black Friday sales.

It was released on PC, PlayStation 4, and PlayStation 5. If you are looking for a great deal on Salt and Sacrifice or any game actually, we highly recommend checking out these deals.

Salt and Sacrifice is an ambitious sequel that adds a lot of new mechanics and ideas to the already established gameplay core from Salt and Sanctuary.

That also means that it is a more demanding game than the previous title in the series. You might need a completely new PC in order to enjoy the game properly, and in such dynamic games, a lot of FPS makes a difference.

For the smoothest and most pleasant experience make sure to check out some of the best gaming PC deals we prepared for you!

Where to Find the Best Salt and Sacrifice Black Friday Deals

You can get your hands on the Salt and Sacrifice digital version for PC via Epic Games Store, or for PS4 and PS5 via PlayStation Store.

Salt and Sacrifice can also be purchased from second-party retailers all over the internet. Check out some of the most popular stores:

Why Buy Salt and Sacrifice This Black Friday?

Salt and Sacrifice is a quite original spin-off on the souls-like genre. It is a 2D game that is very challenging, with great atmospheric visuals and a fantastic gameplay loop.

Apart from defeating enemies you also have some platforming elements in this title. You can play the game in co-op mode so you and your friend can grab a copy of the game each and have fun together. Awesome addition for any masochist, I mean souls games fan.

When Will Salt and Sacrifice Black Friday Sales Start?

November 25, 2022. That is the official date that Black Friday 2022 starts. Like every year, Black Friday takes place on the last Friday of November. This year it is no different.

In addition to that, there will be plenty of companies participating in extensive Black Friday campaigns with Black Weeks and Black Month which means you can grab yourself many discounts throughout November.

If you’re a big-time gamer, then there will be plenty of other offerings available to you in late November. Check out some more of these great gaming deals:

Will Salt and Sacrifice Have a Black Friday Sale?

Yes. The game will most likely feature during this year’s Black Friday. It is a truly unique souls-like platforming action game.

Are Salt and Sacrifice Deals Any Good?

Yeah. The game is not a AAA title, which means it is not the most expensive thing either way, but with the bonus of the Black Friday sale, it is a great game to buy.

If you are eager to get even more discounts and great sales, check out some of our top pages full of amazing deals for some of the best games of all time.