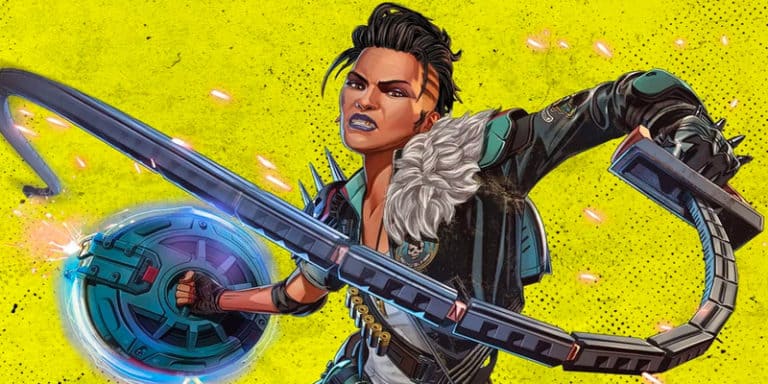 Table of Contents hide
“It’s Mad Maggie. You put that on my grave.”
Legends stick together

It’s official. After significant speculation, Mad Maggie will be the newest playable character to join Apex Legends. And she’s bringing a brand-new season – plus the return of the Olympus map – along with her.

Far from a fresh face, Mad Maggie is a character that fans have been familiar with for some time. Her tumultuous past relationship with hero Fuse (who first appeared back in season 8) was detailed in the “Good as Gold” animation. There, their “truce” was severed under explosive circumstance. And things only got worse for the pair when Maggie briefly hijacked the games, attempting to blow Fuse – and the Syndicate – to kingdom come. Now, time will tell what kind of volatile interactions the two might have when fate – and the Games – brings them face to face again once.

The start of Season 12 is taking place on Apex Legends’ 3rd anniversary, so Maggie has a lot to live up to. But judging by her newly released Stories From The Outlands – “Judgement”, she’s still more than capable of stirring up trouble, in chains or out.

“It’s Mad Maggie. You put that on my grave.”

Mad Maggie is a freedom fighter above all else, one who is willing to pay any price to see Salvo kept out of Syndicate hands. That battle has been lost by the time Judgement starts, having been what inspired Fuse to join the Apex games to begin with. With players having good reason to think they’d seen the last of her, it seemed as though Maggie survived and found herself in Syndicate custody.

Far from just a convenient way to get Mad Maggie out onto the battlefield, her appearance here re-emphasises another side of the Apex Games. It isn’t just a contest for cash and glory. For many, it is also a prison sentence, one expected to carry a deadly punishment. With things looking bleak, we have yet to see what Mad Maggie will do with her back against the wall and little left to lose.

Along with Maggie, Apex Legends Season 12 will be seeing the debut of a 9v9 Control mode, promising frantic action for larger teams. Will this will be a timed exclusive or a new semi-permanent fixture? In addition, players will receive rewards simply for logging in for the first three weeks of the season. These will include permanent unlocks and thematic packs for Legends Octane, Wattson and Valkyrie. Valkyrie will additionally receive a single legendary pack. Players that already have access to the legends will still receive the packs.

Three years in, and Apex Legends is more packed with content and players than ever. With Mad Maggie about to drop, and new modes to access, there may never have been a better time to join the Apex Games.