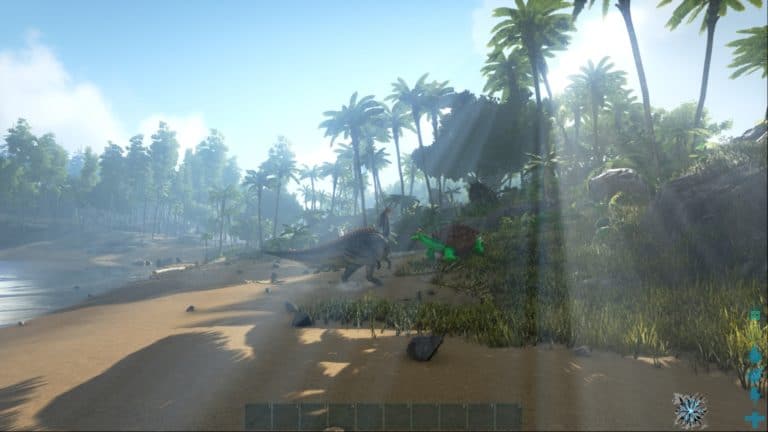 When it comes to survival, Dinosaurs probably aren’t the most prominent experts on the subject, going by how many of them are still around these days. That hasn’t stopped ARK: Survival Evolved from becoming an incredibly popular title that mixes the crafting/survival elements of Minecraft with some of the most dangerous giant lizards that have ever roamed the planet. As with many survival and crafting titles, there is as much content in ARK as you can come up with, since no two games are the same. That doesn’t mean that you won’t get bored of t all eventually, which is where console commands could come to the rescue.

The console commands we’ve found can do crazy things, from making yourself invincible to spawning in an infinite supply of crafting and survival resources. There is an insanely high number of different things that you can do with these commands, so we’ve compiled them into several group to make them easier for you to find.

How to Activate the Console

First things first, how you open the console changes depending on which platform you happen to be playing the game on. For instance, on PC, you press Tab to open the console, while on Stadia you press ` underneath Escape. If you’re on a console, hit the north and west face buttons and the shoulder buttons (LB+RB or R1+L1) at the same time. This should open up the command console so you can type in one of the commands that we’ve listed below.

If you’re playing multiplayer, you’ll also need to type ‘enablecheats’ into the command console or most of the codes below won’t work. If a command from the list below still isn’t working for you, try prefacing it with either ‘cheat’ or ‘admincheat’ and see if that fixes the issue. For example:

Since there are so many commands in the game, we’ve assembled some of the most useful ones into the categories that you’ll find below.

The command for spawning items in ARK: Survival Evolved is a little more complicated than most games. The reason for this complexity is that spawning items isn’t a single command; it’s actually three separate commands that are each used in different ways. Fortunately, we can mostly ignore two of them and instead only use the below command as it is the easiest to understand:

The first part of the command should be pretty self-explanatory, as it’s the part that actually tells the game we want to spawn something. Each in-game item has an ID that you can use to spawn it via the console, like many other games. We’ve listed the most important ones below, but you can find all of them on the game’s official wiki. The ‘Amount’ heading is simply how many of the items you want to spawn, and Quality refers to the overall quality of the item measured in 1-100. The final modifier is for blueprints and is either a 1 or 0. If set to a 1, you will receive the blueprint version instead of the actual item.

Whether you’re playing ARK on your own or with a group of your friends, teleportation can be an incredibly useful tool. As well as being able to teleport players to you and vice-versa, you can also use these commands to travel vast distances over the land. Bear in mind, to find your playerID you’ll need to be an admin on the server and use the showmyadminmanager command to get a list of different player IDs.

Once you’re done trying out the item spawning and teleportation commands above, you can try these ones below that are a bit more like classical cheats. Bear in mind, that these will have a huge impact on your gameplay experience. If you’re after a challenge, be careful which commands you use from the list below.