Dragons vs Men vs The Internet 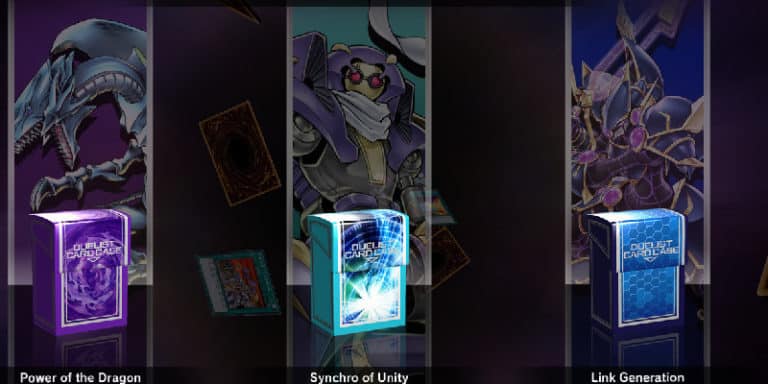 Table of Contents hide
Three of a kind
Power of the Dragon
Synchro of Unity
Link Generation
Which is the best?

In YuGiOh Master Duel you collect and craft cards to create decks. Then you can duel other players with your carefully considered deck building and skill. But how do you start? With a Starter Deck.

Three of a kind

At the beginning of YuGiOh Master Duel, you can choose from 3 starter decks. Power of the Dragon, Synchro of Unity, and Link Generation.

Power of the Dragon

A classic fusion based deck. Filled with cards familar to those who originally played the TCG back when Yugi was the King of Games. The hit cards are 2 Blue eyes white dragon, which is normally an Ultra Rare. Threatening Roar is also a useful battle trap that you get 2 of in this deck. Ring of Destruction is also a classic power card that destroys and opponents monster and deal damage to both players. That’s really it, if you want to build Blue-Eyes I suggest getting this but otherwise, there isn’t much here.

The Synchro summoning based deck. Getting this starter deck is great for returning and new players. The hit cards here are Mystical space typhoon, having easy access to spell and trap removal straight away is never bad. Junk Synchron is a powerful monster in Junk Decks, allowing for east Synchro summoning. Not to mention the Junk archetype has a lot of really good support in the Master Pack that are worth picking up if you want to expand on this starter deck

Link Generation is based on the newest summoning method, Link Summoning. Focused on climbing to the highest link rating, which in this deck in the link 3 Decode Talker. There aren’t any generic power cards in the main deck, but the extra deck has Link Spider, a useful link one for any deck that uses token or normal monsters.

Which is the best?

Overall each starter deck is at a similar level of power and the decision for what deck you want is up to you. But that being said the Synchro Unity deck has the more powerful cards to use while you climb the ladder and build the best decks. Don’t beat yourself up about your choice too much if you have already picked one. You can unlock the other Starter Decks through simply playing the game so eventually you will unlock all of them.