Home » Gaming » Who are the Critical Role campaign 3 characters?

Who are the Critical Role campaign 3 characters?

Who are the characters in Critical Role Campaign 3? 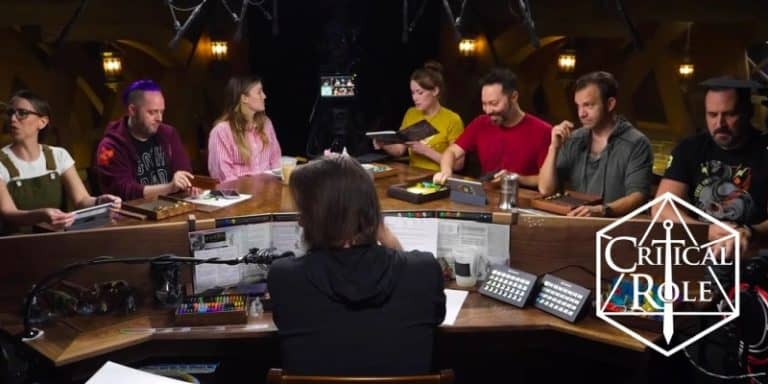 So Critical Role is back. Oh, these tears? They’re tears of joy. I mean, how could you not shed a little happy tear after the pure bliss of seeing Sam’s sponsored videos back? To see our favourite people back on screen after so long! Yes, we might all be in a parasocial relationship with the cast of Critical Role, but oh well!

Well, now that Critical Role is back, with campaign 3 every Thursday, you might want a quick summary on all the cast’s characters and what we know about them so far!

Imogen is a young human with long, light-purple hair. She’s dressed in a slowy blue dress and has a featured yellow scarf around her neck. Imogen speaks with a Southern American accent is quite soft-spoken. She is a little reserved and seems to prefer not to be the centre of attention. Although we’ve not seen what kind of sorcerer she is, fans are speculating she might be a Aberrant Mind sorcerer.

Imogen has a quite cute and sweet relationship with Marisha’s PC Laudna. The two know each other from the start of the campaign.

Laudna is a pale, gaunt humanoid. She had big black eyes and dark lips. With even doll-like features. Despite her rather scary appearence, she’s a rather bubbly and personable woman. She seems mostly calm and doesn’t even seem to notice how frightening she appears. Even getting offended when other judge her based on her looks.

As of now, she’s been revealed to be a Warlock of the Undead, but her Sorcerer subclass hasn’t been shown. Though she could possibly be a shadow sorcerer?

And although she looks humanoid, I’m wondering whether she might be a Hexblood!

This brash and swearing earth genasi is quite the difference from Taliesin’s previous characters. It’s great to see him play someone so different!

Ashton has green skin, and dark purple crystalline hair. But their most notable feature is with the prominent hole in the left side of their head, filled with glass. Ashton is also a new homebrewed subclass of Barbarian that Matt has made.

Orym made his debut in the mini campaign, Exandria Unlimited. There we got to meet this calm and level-headed little halfling. Orym is a relatively relaxed individual, he is serious and dutiful and not at all reckless. He tends to want to leave the harder more complicated stuff to others he thinks would be better at it.

He’s been described as the most moral member of the group.

Sam certainly seems to be following the trend of playing short characters! But Fresh Cut Grass is a new and interesting addition to the Critical Role characters.

FCG is a very kind and polite little fella. He considers Ashton to be a close friend and is willing to help him no matter what. FCG is also playing a new homebrewed subclass of Cleric.

Fearne is a softly spoken six-foot-tall faun with big eyes and furry ears. Fearne also made her first appearance in Exandria Unlimited. She is a calm and collected being, with a great display of compassion and appreciation for nature. But she still shows herself to be very fey-like. With her lack of awareness of normal societal norms.

She is a wildfire druid, and has a little fire spirit with her at all times, Little Mister.

Chetney Pock O’Pea is a gnomish master craftsman rogue. Another elderly character who looks to be about a hundred and something. Chet is a handyman, who loves to make things, hence why he’s quite skilled with various martial weapons. Chetney was conceived as a “true, legit” take on the character Chutney Chocolatecane, a Christmas elf Travis played in “The Night Before Critmas“. But again, people aren’t sure if Chet still isn’t Travis’s official character for the campaign just yet.