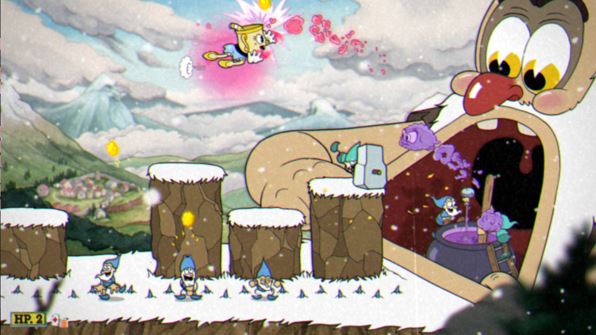 Need help beating one of the first bosses in Cuphead – The Delicious Last Course? Well, you’ve come to the right place, and while you might be struggling to beat Glumstone The Giant and his – highly irritating – gnomes, as with all Cuphead bosses, you can do it! However, you might need a little hand.

Most Cuphead bosses end up being a memory game coupled with hoping you have the hand-eye coordination for the quick movements and reflexes required. Glumstone is a frustrating boss with three stages. Each stage features a different series of attacks and obstacles to avoid, but we’ll walk you through the patterns to look out for and what equipment works best.

As with most Cuphead fights, you’ll need to personalize your equipment and abilities. Some work far better than others, and Glumstone The Giant and Gnome Way Out is no different. But also now you have the option between Cuphead/Mugman and Chalice. Chalice is a great character to play. With her additional abilities and skills, she can really help turn the tide in your favor. Especially with her parry dash which instantly makes parrying so much easier and builds up your supercharge.

It took us four hours to beat Glumstone, so don’t worry if you just don’t seem to be getting it. Don’t be afraid to take a break, take a step back and let your brain process the information before going back in. Once you’re ready, here’s what you need to know.

In terms of Equipment and Abilities, here’s what works best:

Glumstone The Giant Stage One

Stage one starts with a small section of space to move from, mainly on the four pillars. During this time, use either Converge or Spread and try to focus on Glumstone’s nose to cause the most damage. During this stage, there are a few things to look out for:

During this stage, Glumstone also has a number of attacks he’ll use. Remembering and anticipating them is vital to defeating this boss and knowing just what to do. Here are all of his attacks and what to do when you see them coming:

Stage two opens with Glumstone using hand-puppets of King Dice and the Devil. These throw a ball between each other to a crowd of cheering gnomes. This is more of an obstacle course than the previous stage. You can fire on either of the puppets to deal damage, hence why Roundabout and Twist-Up are the ideal shooting styles for this mode. But here’s what you need to be wary of:

This stage can be frustrating because there is a lot going on at once. As mentioned above, it’s mainly an obstacle course while you deal damage to the puppets. But once you’ve beaten them, that’s when Glumstone instead decides it’s eatin’ time as he throws you down the hatch.

Stage three feels a lot more claustrophobic as you’re limited to five small platforms, all while trying to deal damage to Glumstone’s stomach, specifically the ulcer part, which moves back and forth on the roof. For this stage, you want to use either Spread, Roundabout or Twist-up. This stage is a bit tricky, but once you know what you’re looking for it’s a lot easier to anticipate his moves. But before anything, here’s what to look out for:

In this stage of Gnome Way Out, you’ll realize there’s a specific gimmick that once you recognize, you’ll find the whole ordeal so much easier:

That’s it for stage three! You need to spot the meat and bones, all the while avoiding the darts. Once you start recognizing the arc for the meat and bones and which head they’re going to, you’ll be able to move between platforms while firing into the stomach. This particular stage is so much easier with Chalice because of the double jump and the parry dash into the open mouth tongue.

Hopefully, at this point, you’ll have beaten Glumstone and Gnome Way Out. But if not, take a break. Sleep on it if you need to and you’ll be a Cuphead champ in no time! We’ve covered all the other Cuphead – The Delicious Last Course bosses and guides, so be sure to check these out if you need more help.