Relieve the commander of duty with our Elden Ring boss guide 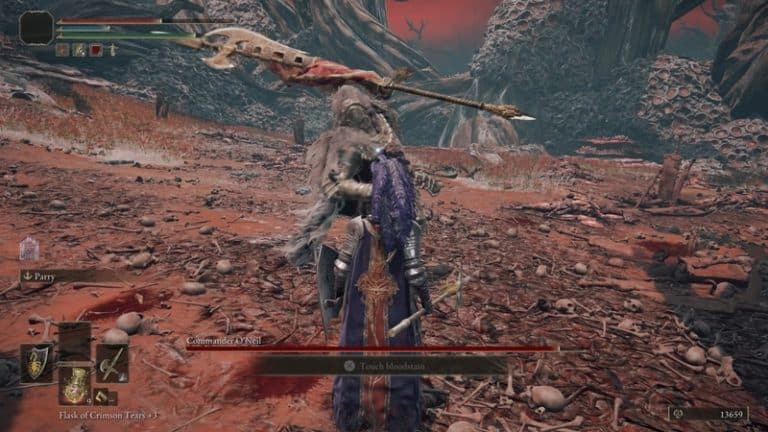 Commander O’Neill is one of the trickier bosses to be found in Elden Ring’s Caelid region. And given the overall difficulty of these rot-blighted wastes, that’s certainly saying something! We’ll help you make this stalwart solider a little bit easier to defeat with our Elden Ring boss guide.

Commander O’Neill can be found wandering the Aeonia Swamp towards the east of Caelid. He is located in a clearing in the swamp roughly southwest of Sellia, Town of Sorcery. The clearing is fairly easy to spot, as it is wide-open and O’Neill is very distinctively armoured.

How to defeat Commander O’Neill

Perhaps the most dangerous thing to look out for in this fight isn’t O’Neill himself, but a buildup of Scarlet Rot. This debilitating status effect can easily be as lethal as O’Neill, if not moreso. In order to make this battle less trying, it is recommended to stock up on Preserving Boluses to temporarily negate the effects of the rot. Their crafting recipe can be retrieved from the Rotting Shack towards the west side of Caelid in Elden Ring.

Though a dangerous foe in his own right, O’Neill will not be fighting alone. Shortly after the battle begins, the commander will  summon soldier spirits to aid him, both ranged and melee. It is recommended to deal with these spirits as soon as possible, potentially with Torrent’s aid. Dealing with the accumulation of scarlet rot, numerous smaller foes and O’Neill all at once is next to impossible.

When defeated, Commander O’Neill will drop 12,000 Runes and the Commander’s Standard, a replica of O’Neill’s own halberd. You will also receive the Unalloyed Gold Needle, an important quest item required by Sage Gowry at Gowry’s Shack just outside Sellia, Town of Sorcery.