How to get Death’s Poker in Elden Ring

A deadly weapon with an appropriate name 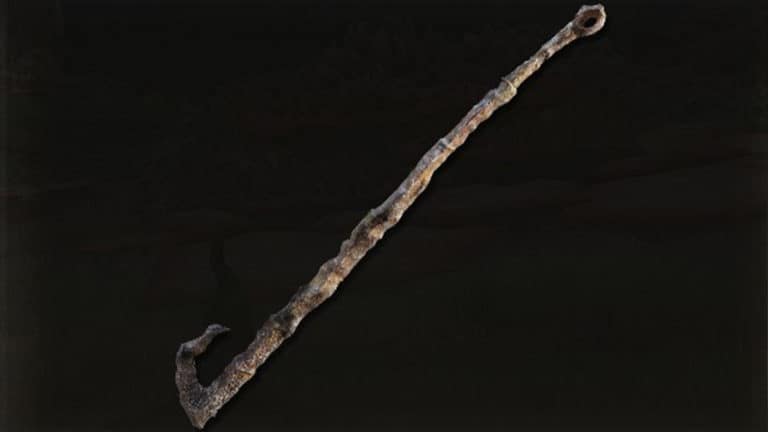 The huge variety of different weapons in Elden Ring means you can spend hundreds of hours exploring the game and still not find everything that the game has to offer you. The Death’s Poker is one such weapon, technically hidden away in an odd corner of the map, but you can actually get your hands on it almost immediately from the start of the game. This guide will show you how to get your hands on the Death’s Poker in Elden Ring.

Where is Death’s Poker in Elden Ring?

You’re going to need to make your way to Caelid by rushing past the church at the eastern side of Limgrave. Follow the main road until you hit the Southern Aeonian Swamp site of grace. You’ll need to rest here until night because that’s the only time that our target will be out and about for us to get at. Once it’s nighttime, head southeast and you’ll come across a Deathrite Bird. This is the guy who has our new weapon, so we’re going to need to take him out to get it.

If you’re not already familiar with the Deathrite Bird, then you might have a bit of a nightmare fighting him. This particular enemy deals in Frostbite damage and can be a doozy to take down for the wrong build. This boss has plenty of range on him, so take advantage of the fact that you can use Shadow to keep yourself moving. This guy is also resistant to everything except for Scarlet Rot, so if you’re specced to use Rot Breath or some other form of this status ailment then you can probably squeeze in a victory that way. The major benefit to this guy coming out at night is that when you die, it’s pretty easy to get your runes back because respawning turns it back into day again.

After you take him down to 50% health he’ll get angry and start using more powerful spells on you. When this happens, make sure you keep your eye on him. Shadow is more than good enough to dodge those attacks, but if you’re not careful you’ll be clipped by the tight timing and some of those moves can be one-hit-kills depending on your build. Once you finally take him down, you’ll get your prize.

What is Death’s Poker useful for?

If you’ve come across some of the late-game bosses, then you’ll know just how useful Frostbite can be. It’s pretty similar to bleeding, but as well as doing a chunk of damage, it also reduced damage negation and stamina recovery once it hits. Death’s Poker is a greatsword that has a pretty high frostbite buildup, and on top of that, doesn’t have really high requirements, meaning you can use it even if you’re not a heavy melee build. The weapon skill, Ghostflame Ignition, creates a small AOE that does frostbite, and when combined with a quick attack directly after, creates a ranged attack as well. It’s a great weapon for anyone who’s been relying on Bleed, only to find one particular enemy is immune to the condition and you need something else to help you.