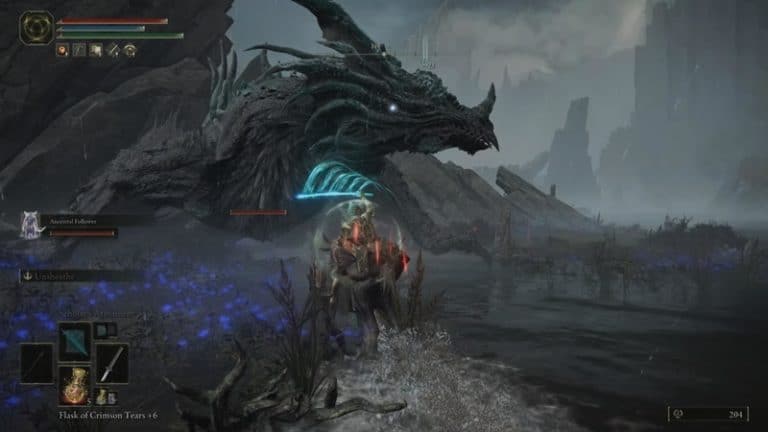 The Academy of Raya Lucaria is one of Elden Ring’s Legacy Dungeons. An important location that you will need to clear in order to claim a Great Rune and be one step closer to becoming the Elden Lord. But these legacy dungeons are not easy to access. Stormveil Castle was guarded by Margit the Fell Omen, and Raya Lucaria is blocked off by another method entirely. Gaining access to the academy requires a Glintstone Key. And the only initially accessible key in Liurnia is guarded by a fearsome dragon. Of course, it is possible to simply bypass the dragon using Torrent and quickly snatch the key. But where’s the fun in that? We’ll help you defeat Glintstone Dragon Smarag and claim the Academy Glintstone Key with our Elden Ring boss guide.

Glintstone Dragon Smarag can be found to the northeast of Liurnia’s temple district. The air will quickly fill with fog as you approach, and countless scarabs will be hovering in the air. Proceed past the scarabs to find a rocky outcropping, under which Smarag is resting. Smarag spends most of his time asleep, allowing you to get a few quick hits in as the fight begins.

How to defeat Glintstone Dragon Smarag

Unlike typical fire-breathing dragons, Smarag’s Glintstone breath is more akin to a heat-seeking magic missile! The Glintstone breath is extremely dangerous and is entirely capable of one-shotting you, especially when first arriving in Liurnia. It is better to stay as close to Smarag as possible and chip away at his flanks. Though be wary of being quickly swiped at by the dragon’s talons while doing so.

Smarag’s scales aren’t just for show, this dragon boasts a very high magic defense. Is possible to bait out his attacks and slowly chip away at him with sorceries, but this will take time. Thankfully, the abundance of blue scarabs in the area provides a top-up to your flasks whenever requires. Running out of FP isn’t much of an issue in this part of Elden Ring. It’s just a question of whether your patience will last through this method.

It is best to attempt to stun Smarag by targeting the dragon’s head whenever possible. Stunning the beast will allow you time to get some crucial extra hits in, or a single devastating critical if you are close enough at the time.

Once defeated, the boss will drop 14,000 Runes and a Dragon Heart.