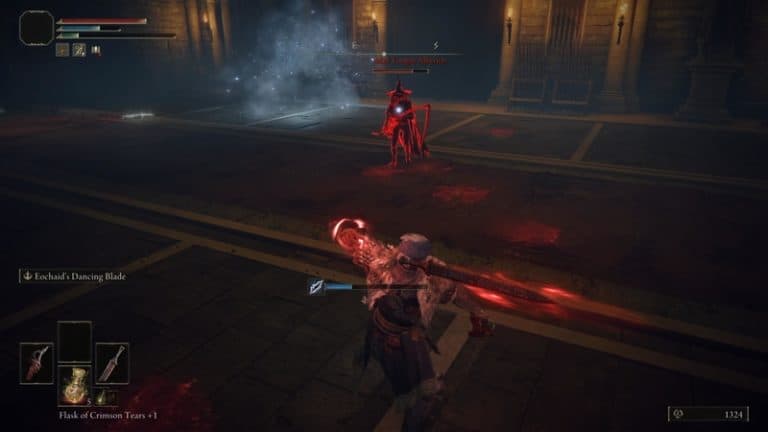 Depending on how much you like PvP, invasions may be a common part of your time with Elden Ring. But even in PvE, there are summon scripted invasions that play out as boss battles. Mad Tongue Alberich is one such invasion boss. And they can be fought somewhere that is usually a safe haven for players! Read on to discover how to find, and defeat, Mad Tongue Alberich with our Elden Ring boss guide.

Head out from the main hub room in Roundtable Hold and over to the room with the balcony, overlooking a long hall. Though it looks like a decent drop to the floor below, the fall can be survived without taking damage.

After dropping down, it is only a matter of time before Mad Tongue Alberich appears at the far end of the hall.

If you close in on this Scarlet-tinged foe and don’t attack – when he appears they will bow to you and give the Reverential Bow emote.

Alberich’s weapons deal both frostbite and hemorrhage. Getting hit enough to let either build-up will deal a huge chunk of damage, on top of the large damage Alberich is already doing.

Alberich has a single health vial that they will drink once their HP is depleted by roughly two-thirds. It is entirely possible to outlast them given your superior healing resources, but you can also damage Alberich quickly enough that they don’t get a chance to use their flask. Proceed as you see fit!

Albeirch hits very hard, but their moveset is somewhat limited. It is possible to learn how to read their attacks in a fairly short space of time.

Once Alberich is felled, you will receive Taunting Tongue, an item that can draw in invaders. In rooms to the left of his area, you can find Cypher Pata, a unique – and uniquely cool – faith-based weapon.