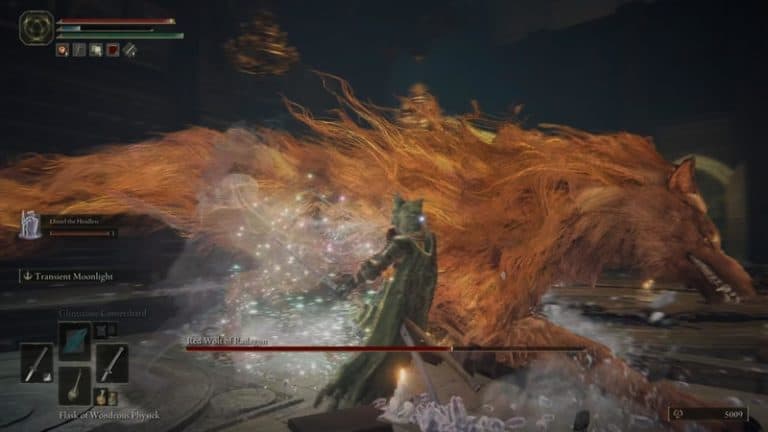 The Academy of Raya Lucaria is one of Elden Ring’s most important locations. The first Legacy Dungeon you are likely to visit after Stormveil Castle, Raya Lucaria is packed full of Sorcerers who won’t be best pleased with you ransacking their place of study. And beyond just Sorcerers, a powerful foe waits to block your path in the Academy’s Debate Hall. The Red Wolf of Radagon is the mid-boss of the Academy of Raya Lucaria. Until you defeat this boss, you will be unable to claim the Great Rune awaiting you in the Academy Library. We’ll show you how to defeat this beast and continue on your journey with our Elden Ring boss guide.

Elden Ring: How to defeat the Red Wolf of Radagon

The Red Wolf of Radagon displays all the viciousness you would expect from an overgrown, starving beast, but with a surprising penchant for sorceries. The wolf is an agile, deadly foe, but its up-close attacks are supplemented by its ability to cast magic and harry you from any range. As well as keeping an eye on the Wolf, be sure to watch out for any spectral blades that it summons. The blades are not especially difficult to dodge on their own but can become trickier when caught up in watching the Wolf.

Use the environment of the Debate Hall to your advantage. When the wolf conjures a fiery blade between its jaws, it will be able to make wide-ranging sweeps with it. Rolling up into the stands will allow you some distance and elevation. The Wolf’s far-reaching jumps mean that it will almost always be able to quickly close the distance with you. But it is worth putting some space between you and it briefly to give you the time to heal and regroup when needed.

The Red Wolf of Radagon has a hardy defense against magical attacks, befitting the area in which it is fought. Up-close combat will fare you better than spells here, which is not always the case in Elden Ring. Additionally, the boss is resistant to the Hemorrhage and Frostbite statuses, so you may want to focus on afflicting other status effects this time around.

Once the Wolf is defeated, you will receive 14,000 Runes and a Memory Stone. This object allows you to memorize more Sorceries or Incantations at once.