Yet another reason to hate snails. 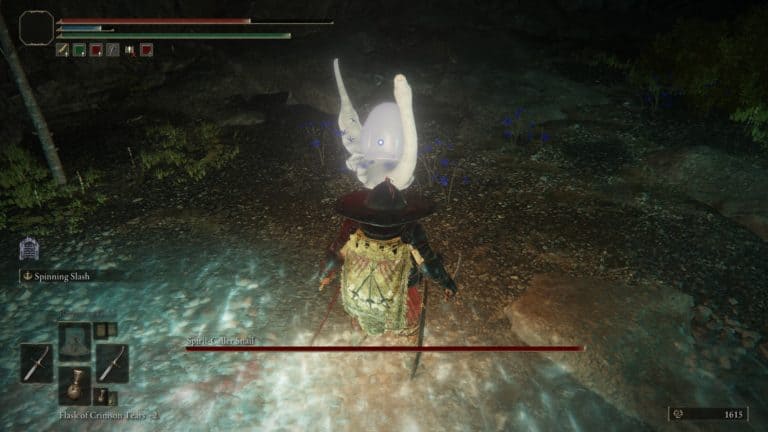 A few times in Elden Ring you’ll find yourself faced with the most unlikely of enemies to fight. In this case, at least twice in the game, you’ll come across the Spirit-Caller Snail boss who summons ash spirits to do its bidding. These things aren’t strong on their own, but some of the spirits that they summon can be brutal, especially the one you have to face later in the game. To help you out, we’ve put together this guide that will detail how best to defeat both versions of this awful mollusk.

This version of the boss in the Road’s End Catacombs is pretty simple, but depending on how much damage you do, and how much stamina you have, you might struggle. As you enter the boss, it’ll summon a spirit to attack you. The best tactic here is to use your stamina to run away from the spirit and find the part of the boss room that is glowing suspiciously. Attack this spot to deal a pretty sizable amount of damage to the Spirit-Caller Snail who should go down after a few attacks. If you attack the spirit, the snail will just summon more.

This particular Spirit-Caller Snail at Spiritcaller’s Cave will summon two other bosses that you have to fight one after the other, and neither of them is particularly easy. Luckily, we do have a few key starts that will help you to get through the fight.

This first part of the fight isn’t too tough if you have your wits about you. The best strategy is to keep yourself at a middle distance from the boss. At this sort of distance, he constantly uses his black fire magic attack. When fire appears in his hand, sprint at the boss and get a few hits in then roll away again. If you do this right, the fire shouldn’t hit you and you can get away with a bit of the enemy’s health at a time. The safest solution is to just employ this technique and avoid every other attack he does by staying in a middle distance and rolling to the left or right whenever he does another attack. None of the timings are overly complicated, so it shouldn’t be too much of a struggle.

Unfortunately, as the boss losses half their health, they’ll gain a bunch of new moves that are much more of a pain. You can still employ the fire-based technique we mentioned above, but you’re also going to have to rely on your dodging skill more. Whenever the boss starts to stretch himself upwards, immediately run away from him. He does two different attacks, one stretching towards you and another spinning in a huge arc. Either one of them can handily be dealt with by just being far enough away. He also has a flaming AOE, but the telegraph is pretty obvious and it can also be beaten by moving away from the boss. Just keep baiting that magic fire throw, and don’t get greedy.

After the other guy goes down, this one will pop up to take his place and he is a much tougher fight. He uses a rapier and has some very strange timings on all his attacks that make him a bitch to dodge. He does use the same magic-chucking attack, be it’s harder to exploit and he is much more prone to running up to you rather than using it. The easiest way to take him down is to use a bow or magic from a distance. Keep running away from all of his attacks, until you see him do a little hop to the side. At this point, fire your bow at him, then dodge roll away from the magic fire he just threw, and fire again. Now return to running from him, pausing occasionally when he lets up to allow your stamina to return. The Green Turtle Talisman is a must-have for this tactic.

Even if you’re keeping your distance, there are two major attacks for you to watch out for. If the boss suddenly grows in size, he’s either about to leap into the air and come slamming down, or he’s going to land on his side and roll towards you. If he leaps, move away from him, and as he’s about to hit the ground either jump or roll to avoid damage. When he starts rolling, you need to dodge forwards towards the direction of his legs. The timing on the rolling attack dodge is insanely tight, but it shouldn’t be too insane for you to get through it as long as you keep dealing decent damage.

Once you dispatch the gruesome twosome, the real enemy will appear. It’s a Spirit-Caller Snail and he is a joke of a fight. Just run up and hit him like 4 times to take him out and finish the fight once and for all. You’ll get a pretty awesome talisman for your trouble.