What’s goodies can you get from the Genshin Impact Battle Pass? 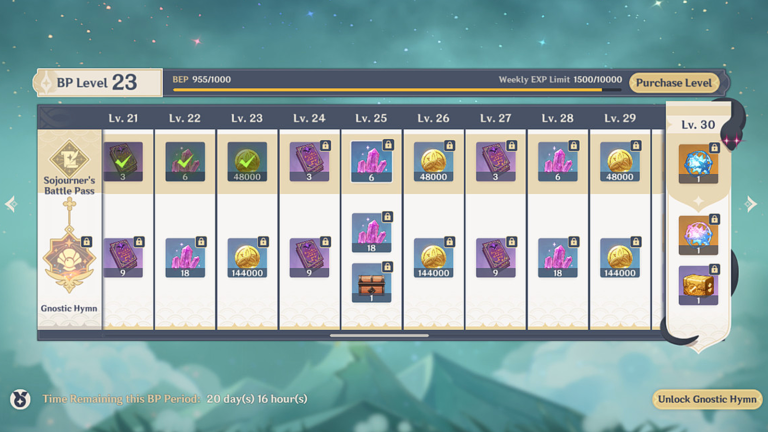 Like many games, Genshin Impact has its very own version of a Battle Pass. There are 50 levels of rewards for you to grab, each level requiring you to earn 1,000 EXP by completing different daily, weekly and BP Period missions. While you can benefit from what the Battle Pass has to offer without spending a single penny, you’ll reap the most rewards from buying one of the two packages: Gnostic Hymn, and Gnostic Chorus.

How to Unlock the Battle Pass

Players won’t be able to partake in the Battle Pass right-away. Instead, you’ll have to play the game enough to reach Adventure Rank 20. This is fairly simple, and will only take you a couple days or so to reach.

You’ll see that below the Soujerner’s Battle Pass, which is where you’ll be getting rewards from, there is a row titled ‘Gnostic Hymn.’ These rewards have to be bought, either by purchasing the Gnostic Hymn package, or the Gnostic Chorus package.

Gnostic Hymn is $10 USD, and will unlock all of the Gnostic Hymn rewards, even if you’ve already claimed their Sojourner counterparts. It also unlocks a special reward at Level 30: the BP Bounty.

The following weapons can be obtained from the BP Bounty. Note that you’ll only be able to select one weapon per Battle Pass.

If you get to Level 50 of the Sojourner’s Battle Pass, you will receive in total:

When you purchase either Gnostic Hymn or Gnostic Chorus and reach Level 50, you will receive in total: