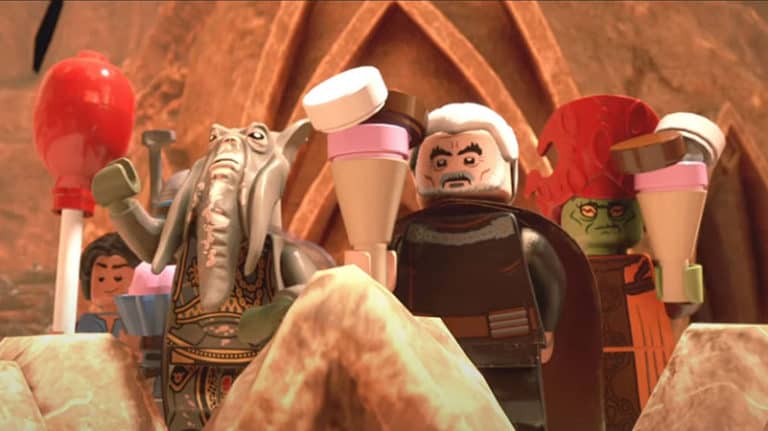 Some of the best LEGO Star Wars: The Skywalker Saga stud farms you can get in the game are through the main story missions. There are over 45 levels in the game, each with its own lengths, objectives and other activities in the game. Because of this, it is perhaps one of the better modes to farm studs in the game. Take Episode 4 for example, the missions vary quite a lot, appearing on Tatooine, the Death Star and other locations.

There are other examples, including missions where you are in space. See the destructions of the death star in Episode 4, or the mission in the millennium flacon called A Skip and a Jump in Episode 9. You can spend time destroying objects in the space missions rather than doing the actual mission to get your studs. The first mission in Episode 1, aka the Bigger Fish, also grants plenty of studs while taking on the Colo Claw Fish on your way to the Gungan city.

However, if you’re able to put up with mindless farms, then there are the destroy object city farms. Several YouTubers like MisterBo and Grrae show stud farms where you mount the walkers in either Coruscant or Bespin, and you run around destroying objects in laps. These are effective and have little downtime since the objects respawn, making them effective, yet tedious farms to do.

For those who love the combat in the game, then we recommend doing heavy fighting missions with a bounty hunter character. Examples that spring to mind are the Endor battles in Episode 6, and Hoth in Episode 5. There can be good opportunities in the Geonosis levels during Episode 2 if you fancy fighting mini-bosses and waves of droids. If you play these missions,  we recommend playing a bounty hunter class and take the Hidden Bounties to upgrade for extra studs per kill if you play these missions. You can get up to 750 extra studs per kill if you fully upgrade the hidden bounties upgrade.

How to get even more studs in LEGO Star Wars: The Skywalker Saga

Thankfully, there are many ways to farm additional studs in the game. Firstly, there are all the cheats that get you more studs. In total, there are five stud cheat codes in the game, which result in 2x, 4x, 6x, 8x, and 10x studs.

However, getting these cheat codes is going to require a lot of studs in the first place. You really should be using the LEGO Star Wars: The Skywalker Saga stud farm stud farms we suggested above to get your first 2 million studs. That way, you can now afford the 2x stud cheat code. From there, you can apply it and then once again farm until you can accord the next stud cheat code. Note, these cheat codes stack, so you can get 30x studs if you have all the cheats applied. Having all the cheat codes unlocked can get you a million studs within minutes, regardless of what farming method you are using to get studs.

Do note that you need a spare Datacard for every single one of these cheat codes. So, we recommend checking out our guide on getting Datacards in the game. It’s better than spending your studs on the perk that shows you where the Datacards are, allowing you to save even more studs for the stud cheats later on.

Meanwhile, there are perks you can get that make getting studs easier. For example, there is the Attract Studs perk you can find in the upgrades menu. Upgrading this makes you a stud magnet, dragging the dosh to your character or vehicle while out on a mission. It makes it easier to pull those hidden studs you may have missed and speeds up the process of getting those awkwardly spaced studs, especially for those opting for the city laps stud farms in LEGO Star Wars: The Skywalker Saga.

This concludes our LEGO Star Wars The Skywalker Saga stud farm guide. No matter what type of player you are, everyone in this guide has something for everyone.